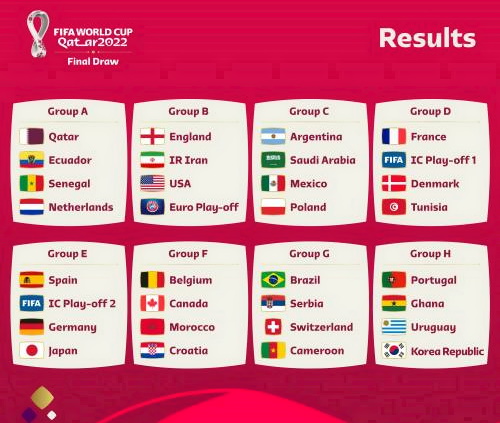 African side Cameroon has been drawn against Brazil and Senegal against the Netherlands in the 2022 World Cup draw held in Qatar on Friday by FIFA.

Cameroon will play in Group G alongside Brazil, Switzerland and Serbia, while Senegal is in the Group alongside Qatar, Netherlands and Ecuador.

In Group D, reigning champs, France will confront Denmark, Tunisia and either UAE/Australia/Peru.

Spain and Germany will confront each other in Group E alongside Japan and Costa Rica/New Zealand.

Ghana will play in Group H alongside Portugal, Uruguay, South Korea and Ghana.
Another African side, Morocco will clash with Belgium, Croatia and Canada in Group F.

The World Cup happens between 21 November and 18 December in Qatar, with the hosts playing Ecuador in the competition’s initial game.