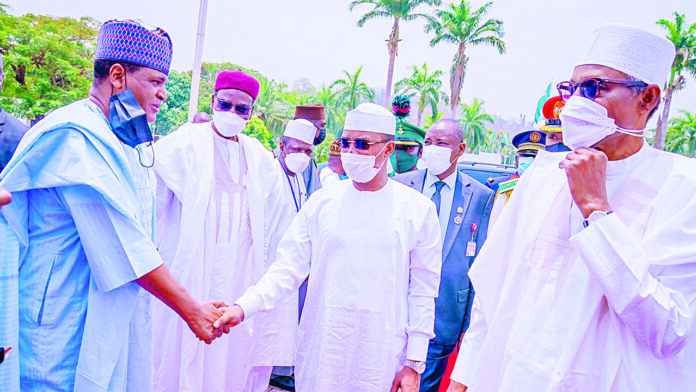 The Federal Government has debunked insinuations that it had been overwhelmed by persisting insecurity in the country.
The Minister of Information and Culture, Lai Mohammed refuted this while addressing State House Correspondents after the weekly Federal Executive Council (FEC) meeting presided over by President Buhari at the Aso Villa, Abuja.
Mohammed disclosed that terrorists who attacked a military base in Birnin-Gwari, Kaduna State, on Sunday, were successfully repelled and suffered heavy casualties.
Reports filtered out on Tuesday about the attack, which was said to have claimed between 11 and 17 soldiers and three vigilante members and some military equipment, including two armoured personnel carriers (APC), were said to have been destroyed by the invading terrorists.
He noted that the details of the casualties suffered by the terrorists on Sunday were unavailable in the public space because the military have not been displaying details of their successes in the war on terrorism in the media.
The minister, however, blamed the media for providing oxygen for terrorists by publishing their activities on the front page of every newspaper.
“Unfortunately, it is the story of second-guessing that is going on and we will continue to give relevant information on the progress we’re making in our fight against terrorism. But we can assure you we’re on top of this matter and in any country in the world, while we are fighting terrorists, the oxygen they need is what is being provided daily today, which is they want to occupy the front page of every paper.
“They want to carry out spectacular attacks even when they are down. This is where I think we also seek your support in understanding the mentality of terrorists, that even when they are dying, they will look for the soft underbelly that will keep them relevant, and enable them to get more money from their sponsors, more support from their sponsors.
“But clearly the last three, four, five days, the military recorded massive victories against terrorists and bandits, either in the northeast or in the Kaduna, Niger axis.
“I know that Monday, there was a very successful aerial interjection, where scores, if not hundreds of bandits/terrorists were eliminated. Even when we’re able to identify where the bandits are, sometimes, out of fear of collateral damage to the innocent civilians, you choose the time you want to strike.
“But I just want to assure you that the administration is not unmindful of your anxieties and your concerns. But probably because we are in charge, we can assure you that there’s really, really no cause to feel that the government is overwhelmed, not at all. We are not overwhelmed and the last few days I think has confirmed that.
“Unfortunately, when we inflict these victories on the bandits for many reasons, we do not come out and say we have killed so many because it’s continuous. But very soon Nigerians would feel the impact of these victories”, he explained.
Mohammed, while responding to a question on the worsening economic situation in the country, blamed the People’s Democratic Party (PDP) for laying the foundation for hunger currently being experienced by Nigerians.
He, whoever, explained that despite the various challenges the current administration is doing everything within its power to address the situation.
Meanwhile, FEC Approved N36.1 billion for Keffi-Nasarawa-Toto Road in Nasarawa State, Central Nigeria.
The Minister of Works and Housing, Babatunde Fashola revealed this while briefing State House Correspondents on decisions reached.
Fashola aaid,“The Ministry of Works and Housing presented a memorandum to council for a contract for the rehabilitation of 118.9 Keffi-Nasarawa-Toto Road in Nasarawa State and the memo was approved for the award of the contract for N36.130 billion”.
He also explained that the new Executive Order 11 signed by President Buhari will help improve the life span of all public buildings.
The minister said that Nigerians stand to gain a lot form the Executive Order, adding that this was the first time the Nigerian government is making maintenance a matter of national policy.
President Buhari had signed Executive Order 11 into law before the commencement of the week’s Council meeting.
Several memos were presented to the council during the meeting for road rehabilitation projects and maintenance of airports across the country.
The Minister of Aviation, Hadi Sirika, on his part said, council approved N5.65 billion for the maintenance of air terminals in Abuja and Port Harcourt for three years.
Council also approved N469.6 million for parts of L3 x-ray machine for clinics for at the airports in Abuja, Kano and Lagos airports.