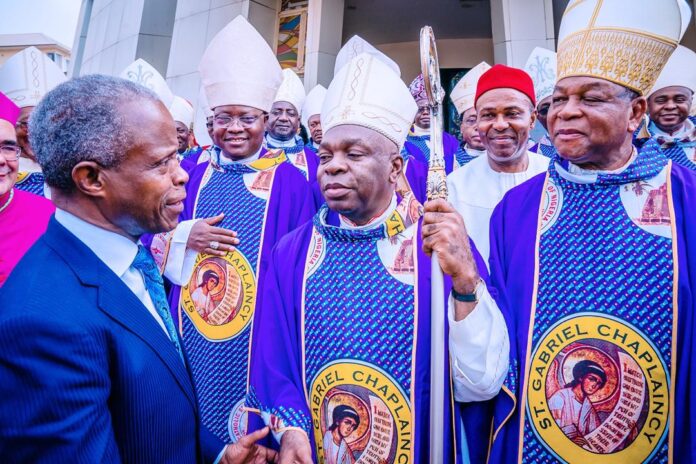 The Catholic Bishops’ Conference of Nigeria (CBCN), on Friday, said that Nigeria is currently seized with despair occasioned by massacres, inflation and industrial action by university lecturers across the country.

CBCN President, Most Revd Lucius Iwejuru Ugorji, made the assertions in his 2022 Easter message to the nation through the National Directorate of Social Communications, Catholic Secretariat of Nigeria, Abuja.

He said: “As a nation, we are celebrating Easter this year in a rather dismal atmosphere that breathes pessimism and despair. The growing insecurity of life and property in the country is compounded by the rising wave of mindless massacres of innocent citizens from unscrupulous terrorists, causing bereavement, trauma and uncertainty.

“Economic hardship with soaring inflation continues to sweep across the nation like wildfire and seems to reduce millions of our country men and women to a life of wanton suffering and distress.

“The ongoing strike of the Academic Staff Union of Universities (ASUU) is thwarting the academic ambitions of many Nigerian students. In some parts of the country, workers are owed arrears of salary, while retired senior citizens eke out existence without regular pensions.

“Many young people are deeply wounded and degraded by unemployment and poverty, a poverty that breeds crimes and seeks relief in hard drugs.

“The appalling economic condition is worsened by the present scarcity of fuel, which is as puzzling as it is frustrating. This horrible state of affairs is driving many compatriots to a feeling of cynicism as they gaze at a gloomy future that seems to promise them little or nothing.”

The CBCN also said the 2023 general elections should not be regarded as a do-or-die affair; calling on politicians to ensure that there was no bloodshed during the polls.

Continuing, the Catholic Bishops said: “As we draw closer to another period of general elections, which are often characterised by bloody conflicts, we urge everyone seeking an electoral office to embrace the spirit of sportsmanship and not to see a political contest as a do-or-die affair.

“We also implore one and all to make a personal commitment to non-violence. This is because violence only breeds violence. The vicious cycle of violence results in utter destruction and is never a solution to any human problem.

“Accordingly, far from fighting and killing one another as a way of settling differences, we should say no more bitterness and killings.”

Notwithstanding the challenges bedeviling the nation, the Bishops stated that the central message of Easter is that when the pressures of life seem heavy; there is a light at the end of a dark tunnel.

“This message of hope underscores that even though the forces of evil might seem at times to have an upper hand over the good, on the long run the good will triumph over evil. Accordingly, far from yielding to pessimism and despair, we should face the future with hope and optimism, and always try to persevere to the end in hard and difficult circumstances,” CBCN stated.