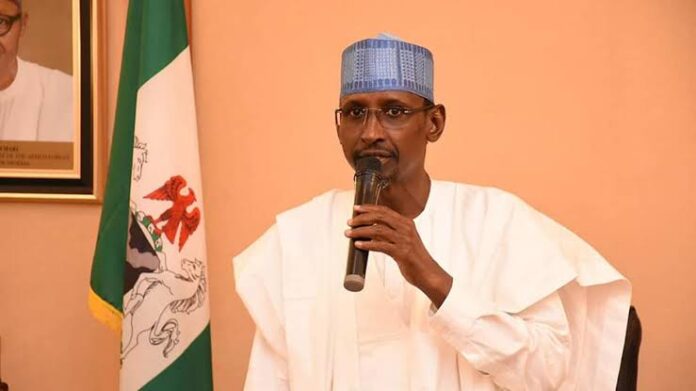 Minister of the FCT, Malam Muhammad Musa Bello has expressed the appreciation of the FCT Administration to Senator Abubakar Kyari for his commitment to the development of the the capity city while he served as Chairman, Senate Committee on FCT.

Malam Bello stated this when he led a delegation of top management officials of the FCT Administration to the APC National Secretariat, Abuja, on a thank-you and congratulatory visit to Sen. Kyari who recently assumed office as the Deputy National Chairman North, of the All Progressives Congress APC.

“Basically, we have come here as a team to convey to you our deep and sincere appreciation for the way you conducted the affairs of the FCT Senate Committee and the way you interfaced very closely with myself, the Hon. Minister of State, the Permanent Secretary, the Chief of Staff, and all the senior management staff.

“In all our official encounters with you, you did it with dedication to duty and passion for the development of the Federal Capital Territory.

“We are particularly delighted with this elevation, because quite frankly, we know you are the right person for the job at the right time,” Bello stated

The Minister added, “We want to use this opportunity to congratulate you for your well-deserved elevation to the post of Deputy National Chairman North, of the APC.

“The gold fish has no hiding place. For those of us who have known you for quite some time, you are well positioned to take this responsibility. You have served as a public officer in various capacities as Commissioner and Chief of Staff, and you have done very well also as a politician.

“You have served your state diligently, served the Senate diligently and now, by the grace of God, you are going to serve members of the party in the 19 States of the North, and by extension, the nation at large” the Minister added.

Senator Abubakar Kyari while responding expressed gratitude to God and revealed that he left the Senate with mixed feelings because it was a time the Senate Committee on the FCT had laid down measures to bring about a lot of positive changes in the FCT particularly, he said, “owing to dedication of the Hon. Minister and staff of the FCTA and FCDA”.

The APC Deputy National Chairman, however, pointed out that the population explosion challenge which forced relocation of capital out of Lagos was currently facing the FCT and exerting undue pressure on existing facilities.

“But with the proactive steps taken now and others on the way, I believe we will be able to match up those infrastructure” he added.