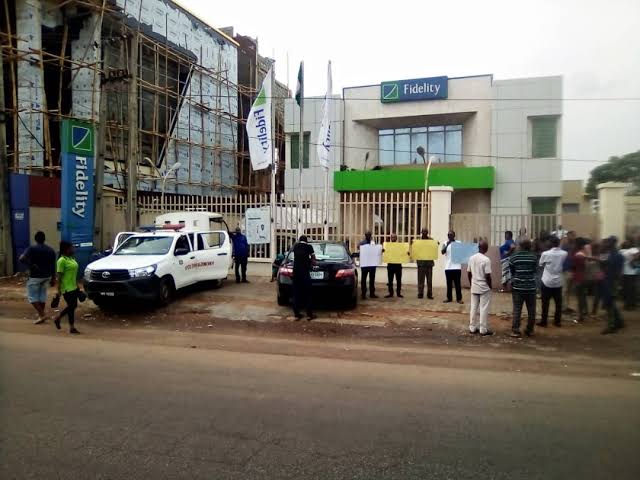 Activities were grounded to a halt at a branch of Fidelity Bank along Taiwo Road, Ilorin yesterday when members of the Amalgamated Union of Public Corporations, Civil Service Technical and Recreational Service Employees (AUPCTRE) picketed the new generation financial institution.

Customers, who arrived the branch of the bank in the morning for one transaction or the other were declined access to the bank premises due to the industrial action.

It was gathered that the picketing of the bank was sequel to its refusal to comply with the Garnishee Order of the National Industrial Court directing payment of a sum of N471million, being the entitlements of workers of Anambra State Environmental Protection Agency and Anambra State Water Corporation under the aegis of AUPCTRE.

It was learnt that the industrial court, in a judgement earlier delivered, ordered the bank to immediately pay the entitlements to the union.

Security personnel including policemen and operatives of the Department of State Service were sighted providing cover for the aggrieved workers.

The AUPCTRE members brandished placards with various inscriptions, demanding that the judgement of court must be obeyed.

No bank official was available for comment when our correspondent visited the branch in Ilorin yesterday.

Speaking on the development, the state Secretary of AUPCTRE, Comrade Saliu Oluwole Suleiman, said the picketing of the branch of Fidelity Bank was in compliance with the judgement of the court on Garnishee Order for payment of entitlements to workers in some agencies of Anambra State government.

He said the management of the bank was duly notified about the decision of the labour union to picket its branches across the nation.

Suleiman urged the bank to set machinery in motion for the payment of the money, adding that court judgement must be complied with.

“There was a suit against the Anambra State government on the salary owed workers in two agencies in the state amounting to N471million. The agencies concerned include Anambra State Environmental Protection Agency and Anambra State Water Corporation. Fidelity bank was joined in the suit.

“And there was a judgement that the National Industrial Court in Enugu directed that the bank should pay the money. At the receipt of the judgement, we wrote to the bank for the payment so that they can comply with the court judgement; they refused.

“We gave them (the bank) 21 days. When it elapsed, we still gave them another seven days, which lapsed yesterday (Wednesday).

“So, the national leadership of Amalgamated Union of Public Corporations, Civil Service Technical and Recreational Service Employees (AUPCTRE) directed that all the state councils and Abuja should picket branches of Fidelity Bank nationwide to press home for our demand so that they can be forced to pay the Garnish money”, he said.

Asked about a stay of execution of the judgement, the AUPCTRE state scribe said there was none except the notice of appeal filed by the bank.