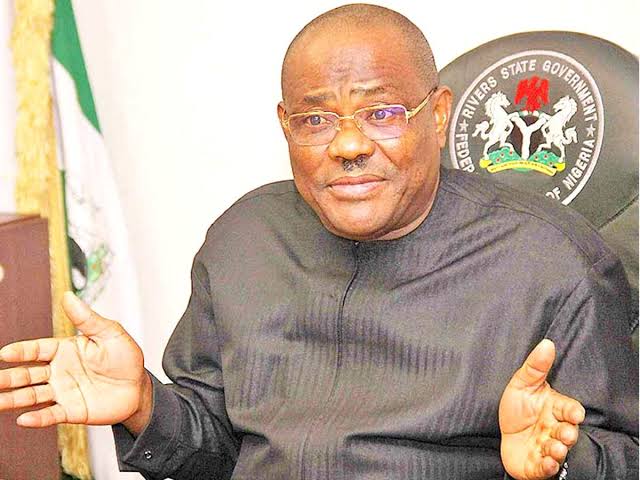 Governor Nyesom Wike has lambasted the All Progressives’ Congress, APC, accusing it of paying lip service to the myriad of challenges facing the country.

The Rivers state Governor also decried the lack of capacity of the ruling party in the management of the country’s resources.

“Aside from the poor record of performance of the ruling party, they also lack capacity to think outside the box in generating ideas that could help solve our problems.

The APC is a confused party, the government is also confused. You declared war on corruption on the one hand, you are granting state pardon for those who were convicted of corruption charges, on the other hand.

They have not only discouraged the anti-corruption agencies, but also demoralised the Judiciary, which is the hope of the common man”.

“It is obvious to all and sundry that the APC is an enabler of corruption and cannot salvage Nigeria at this point.

The country needs urgent democratic intervention to arrest the precarious situation we find ourselves.

APC has failed woefully to provide the right leadership that would positively respond to the challenges facing us. They can neither think nor act at the appropriate time.

Rather than proactively engage, they always depend on reacting to situations. The killings in the land are too disturbing to contemplate.

We cannot sustain a national discourse of bloodletting and kidnapping which have combined to reduce our previous economic gains.

This lamentation needs to stop. We cannot continue to agonise, hence it is expedient at this time to mobilise, sensitize and conscientise our people to prepare to vote out the ruling APC in the 2023 elections”.

“Nigerians are tired of excuses. Nigerians can no longer endure this pervasive hardship and hunger in the land. APC has come to the end of the road and its ability to respond appropriately to the challenges has been impaired. Nigerians must be unanimous in rejecting the APC in 2023 and vote for the PDP and my humble self to take the country out of its present predicament.

We are tired of reading condolence messages. We need government to take action that would halt the carnage and bloodletting. We need action, not mere rhetorics. Nigeria has never gotten to this level of confusion before. We need to rescue the nation urgently before the imminent implosion”.

“The APC aspirants should hide their heads in shame for their failure to find answers to the nagging questions before us. If they have answers to the problems facing the country, how come they have not availed their president the opportunity of those solutions? They are bereft of ideas hence it is shameful for the APC to still muster courage to present aspirants for the election. By now, we expected the APC to have apologised to the nation for its several failures across the country instead of gallivanting about in trying to sustain a regime of failure.