HomeSportsPolice unveil football stars as ambassadors in fight against cultism, others
Sports

Police unveil football stars as ambassadors in fight against cultism, others 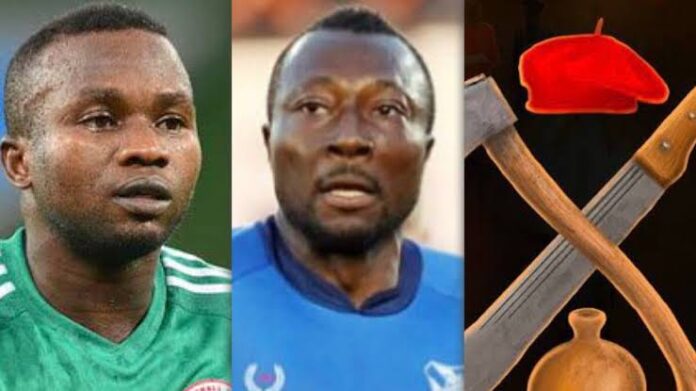 The Police Campaign Against Cultism and Other Vices (POCACOV), a police advocacy group, on Monday unveiled football stars as ambassadors in its fight against cultism, substance abuse and other vices.

Unveiling the two ambassadors in Enugu, the National Coordinator of POCACOV, CSP Ebere Amaraizu, lauded them for identifying with the Nigeria Police in the ongoing nationwide campaign against cultism, violent behaviours, substance abuse and other vices.

Amaraizu noted that the duo remain role models and superstars to young minds, while they are capable of using their platforms to inspire young minds to become champions, thereby changing their narratives for a greater society.

He said: “Both of you have sound football pedigree and track records devoid of involvement with vices and other criminal activities and young minds can emulate you and become champions and superstars as well.

“To you, Ejike Uzoenyi, you played in Nigeria and later played in France, South Africa with Mamelodi Sundowns.

“You played with Super Eagles and won the African Cup of Nations with late Manager, Stephen Keshi, and you also played for CHAN Eagles and became the most valuable player and today, you are back to your mother club, Rangers International FC, still playing.

“Likewise, age-long Rangers Captain, Okey Odita, who made it with Enyimba and Rangers International FC, came out with a sound record of good attitude.

“You people can do a lot to help transform the mindsets of our young minds towards remaining dedicated, purposeful and law abiding as prospective champions.”

Responding, Uzoenyi, who spoke on behalf of the duo, expressed happiness with the exploits of POCACOV as it concerns mobilization, partnership and participation towards societal problem solving, for a better society.

“We are assuring the Nigeria Police of our continued support towards enhancing the participation of young minds as well as value reorientation activities for young minds for strategic leadership direction and positive development,” he said.