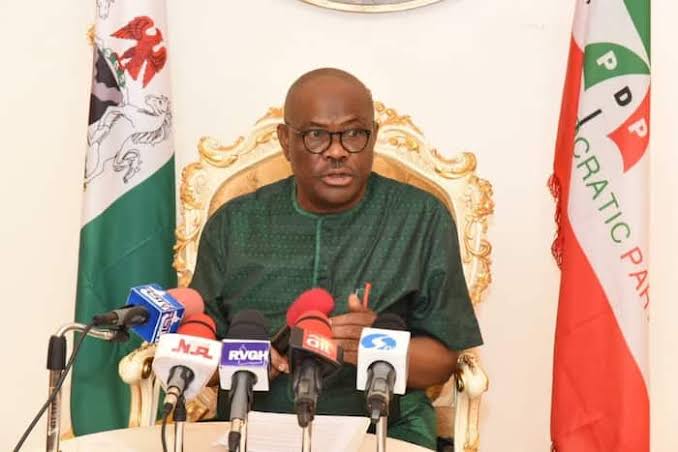 Rivers State Governor, Nyesom Ezenwo Wike says the presidential pardon for persons prosecuted on corruption charges by the federal government only suggests that there is no need to have anti-corruption agencies in the country.

Governor Wike wondered how to explain the embarrassment that the Economic and Financial Crime Commission (EFCC) and the Independent Corrupt Practices Commission (ICPC) are made to suffer by that action because it has made them to be irrelevant.

The governor made the statement while speaking to delegates of the Peoples Democratic Party (PDP) in Kano State on Monday as part of his ongoing consultation ahead of the 28th and 29th Presidential primary.

“This is the same government that complained against the judiciary that it is not fighting against corruption. Now, look at what the judges have passed through; sleepless night from the FCT High Court to the Court of Appeal to Supreme Court, everything is wasted.

“If President Muhammadu Buhari knows that he doesn’t want to fight corruption, then, he should disband EFCC and ICPC because he has thoroughly embarrassed them.

Governor Wike dismissed the defence put up by the Senior Special Assistant on Media and Publicity to President Muhammadu Buhari, Malam Garba Shehu on why the pardon should not be faulted.

The Rivers State Governor said it should be a thing to worry about because the same people who said they are fighting corruption are going through the back and releasing the same people that they said are corrupt.

“So, when his press man (Garba Shehu) said I was invited to the Council of State, is it because I’m not there, that is why they did what they did?

“If you wanted me to contribute, you would have sent me the agenda. Then, I would have known what I’m coming to do in the meeting.

“It’s not when you don’t send me agenda, I come, then you boxed us in, ambushed us, then you said I attended the meeting where they approved it. I will not attend such meeting.”

Governor Wike also explained that, “When they said my deputy attended and when they looked back they could not see my deputy again. Why would you see her?

“When she had seen what was there, she had to switch off because she knew it was a wayo. That is what this APC government is known for.”

The governor told the delegates that it was time for Nigerians to brace up to correct the mistake that brought the All Progressives Congress (APC) government to power.

Governor Wike said he was offering himself as the most competent aspirant seeking their votes at the presidential primaries to fly the flag of the PDP.

He noted that it will require a man like him to end the sight of insecurity and poverty that are seen everywhere in Nigeria.

Kano State Chairman of the PDP, Shehu Wada Sagagi, assured Governor Wike of the delegates support because they believe that the next presidential flag bearer of the party must come from the southerner part of the country.

“We know as a matter of principle, and all of us here agree that presidency should move to the South. That is a fair deal, because when in 2019 the presidency was zoned to the north, no any southern aspirant emerge to say that he will contest, unlike what is happening now. But I am sure with the way you are going, you will defeat all those evil forces that are planning evil against you.”

Sagagi said Kano delegates will not be swayed by ethnoreligious sentiment. He declared that they will support Governor Wike based on his proven competency, capacity and ability to move the country forward.

“We are not after any Muslim leader. What we are after is somebody who has the capacity, who has the ability and who has the will to move the country forward. We are tired of this ethnic and religious sentiment which is taking us nowhere.

“For the greater part of the life of this country, northerners have been at the saddle of leadership. But where are we today? In the last 60 years, from 1960 till date, Nigeria was not able to double its GDP twice. What a shame. Most of our African neighbours, they have tripled their GDP from the time they received independence till date.”

The PDP chairman lamented the inability of the federal government to tackle lingering insecurity in the country and the mismanagement of the Nigerian economy. According to him, for the first time in history Nigeria entered recession twice within a decade under the APC’s reign.

“The economic growth is nothing to write home about. It is more than 1.8 percent. During Jonathan’s time, with N6 million I can buy truck load of groundnut from Taraba. Now, with N21 million, I cannot buy that. That means my capital has depreciated three times compared to during Jonatha’s time.