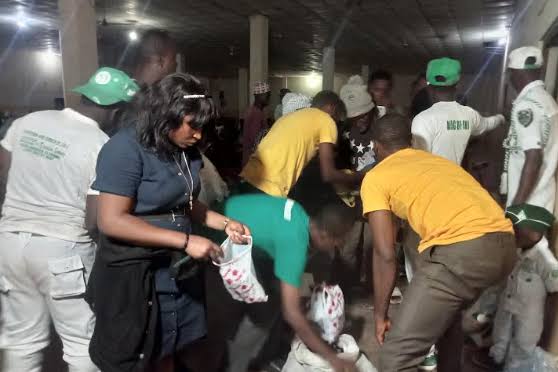 Yahaya-Kwande Foundation and Victor Bello Foundation yesterday brought together hundreds of Christians and Muslims to break Ramadan fast at the Jos Central Mosque to foster peace, unity and love among the two religious group in Plateau State.

“We felt as Nigerians and Plateau people, that we will be stronger when we are united irrespective of our religion and ethnicity. We will advance growth and development of our people when we are together and breaking the fasting together will strengthen peaceful co-existence among us.”

He said the two Foundations have been working to promote an ideal society where both Christians and Muslims can walk across the two communities for their lawful businesses without any harm.

Yusuf Yahaya-Kwande in a statement described the event as historic and said this will go along way in strengthening peace, love and unity among Christians and Muslims in the state

“The purpose of this event is to strengthen love, unity and peace among people of different faith and ethnic groups to live together peacefully in Plateau State.”

Mrs Margaret Sylvester Dachomo, wife of residence Pastor, Church of Christ in Nations (COCIN) headquarters, who participated in sharing food to both Christians and Muslims admonished the two religious group to embraced each other and live as one.

“The important of beaking this Ramadan fast together is to create more relationship and show love to each other particularly the little children who did not know what was happening before now.

“I grew up in Laranto in Jos with Muslims and I work for some years at COCIN Sarkin Mangu where we had a very cordial relationship until the monster that came and snatched the peace away from us. We felt coming to cook and eat with our Muslim brothers will create a relationship among the children as they grow, they will remember that there was a time that christians came here and eat with them.”

He said the initiative by the Yahaya Kwande Foundation and Victor Bello Foundation will strengthen better understanding for peace and unity among the two religion.

Imam Yakubu said living together as a people is greater than being apart and urged Muslim and Christians to demonstrate uncommon spirit of patriotism and embrace each other for greater peace in Plateau and Nigeria.

The Director General Plateau State Peace Building Agency, Joseph Lengmang, who was represented by Manji Danjuma said peace is the bedrock for development in any society.

He advised the two dominant religion to inculcate the spirit of love, accommodation and tolerance in their children and thank the Yahaya Kwande Foundation and Victor Bello Foundation for initiating the programme which will deepened peace in the state.

Founder “Let’s Rebuild Nigeria” Aminu Badamosi called on both Christians and Muslims to shun all form of bitterness and join hands together to rebuild Plateau and Nigeria for peace and development.