Tinubu: Sowore Got It Wrong 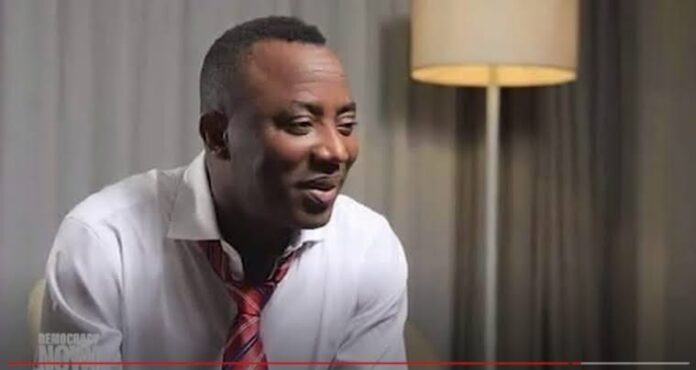 Wannabe activist and purveyor of Revolution Now, Omoyele Sowore needs urgent help. Sowore needs saving from himself, and Nigerians have to be saved from his warped perception of reality. The self-styled activist took to Twitter a couple of days ago to malign a frontrunner among the All Progressive Congress (APC)presidential aspirants and former Lagos State Governor, Asiwaju Bola Tinubu in a move that rolled his lack of depth and mischief into one puke-inducing flop. He got it wrong and should have corrected the wrong impression he created had he the lightest iota of honour.

Sowore tweeted about a video of Tinubu’s intervention on the insecurity bedevilling the country in a manner that attempted to cast the APC Presidential candidate in a bad light. Tinubu had in the video recommended massive recruitment of the youth into the military to counter the scourge of terrorism and banditry that the country is facing.

Right thinking Nigerians already know the import of massively recruiting the youth into the military, which would be a win-win situation for the country. However, for the sake of the few brain-damaged people that see Sowore as an activist or a messiah, the importance of such recruitment is tremendous.

First, as Tinubu rightly explained, terrorists, bandits and other criminals are practically in competition with the government and organized private sector to recruit unemployed youth. Recruiting these youth into the military immediately makes them unavailable to people with the intent of indoctrinating them into lives of vices and crime. This will practically reduce the number of criminals the country has to combat by up to half; the flip side is that these numbers of recruited youth then become available to counter those that have fallen on the wrong side of the law.

Secondly, by employing such youth, more money will filter into the system and consequently improve the economy of individuals. This is one of the best approaches to wealth distribution yet, it puts money in the pocket of young persons without it seeming like handouts.

Additionally, there is the added advantage that more young persons will have combatant training, which would tilt the odds against terrorists now believing every Nigerian they decide to abduct is fair game. Even when these youths eventually leave the military, they remain in a position to coordinate their communities to repel marauding bandits and other criminal elements.

Furthermore, in peacetime, these youth can be deployed to undertake non-combatant roles like providing agro-support, engineering works, and emergency and rescue services. One would have thought that a Sowore, who posture as an international citizen, would know that this is the practice in several countries that have large military populations for peacetimes.

Tragically, Sowore got it wrong on his tweet that he attempted to use to disparage Tinubu. The APC presidential hopeful got it right, as he mostly does, and the Revolution Now pretender is way out of his league. He is totally incapable of the kind of nationalistic thinking that Tinubu brings to issues pertaining to Nigeria.

Unfortunately, there are going to be more of such misguided and malicious tirades from Sowore in the coming days, weeks, and months until the 2023 Presidential Election is conducted, and he is again proven to be a comedian, a calling at which he has proven to be a charlatan. There is a well-established pattern that is worrisome. Sowore has fully deployed the publication arm of his business, Sahara Reporters, as a tool for attacking Tinubu’s reputation. Sahara Reporters has committed itself to frame all discourses about Tinubu from a subjective perspective intended only to damage his reputation.

The only good thing about this so far is that those who know are aware that Sowore’s attacks on Tinubu, whether on Twitter, Sahara Reporters, or any other platform, are not driven by a patriotic zeal of an activist who wants the best for Nigerians. Sowore’s tirades against Tinubu first became noticeable after the former Lagos State Governor called his bluff when he attempted to blackmail Tinubu with the threat of publishing a list of Abuja property that he thought belonged to Tinubu.

In the years that have followed since Tinubu called Sowore’s bluff by refusing to succumb to blackmail since he did nothing wrong in the first place as his hands are clean, the publisher of Sahara Reporters has published one lie after the other in the expectation that one would stick. As providence would have it, it turned out that it is Sowore that is continually exposed as a fraud – whether as an activist or a journalist.

Instead of futilely attempting to ridicule Tinubu, Sowore should focus more on his comical entry into the 2023 presidential race. Perhaps his website, Sahara Reporters, would have created more brain-damaged people that will vote for him to increase his vote from the ridiculous 33,953 he polled in 2019 Presidential Election.

While at it, Sowore would do well to reach out to the neocons he is running errands for and impress on them that after years of being their agent of destabilization, their goal of breaking Nigeria remains unattainable, especially with a Tinubu presidency impending. A Tinubu presidency would do great things for the youth as it would give its all to address unemployment, which is the greatest challenge the youth face. If Sowore does not understand this then there is no way to help him.

Abubakar wrote this article from Kaduna.