HomePoliticsAnyone that pays N100m for APC presidential form should be arrested, investigated,...
Politics

Anyone that pays N100m for APC presidential form should be arrested, investigated, says HURIWA 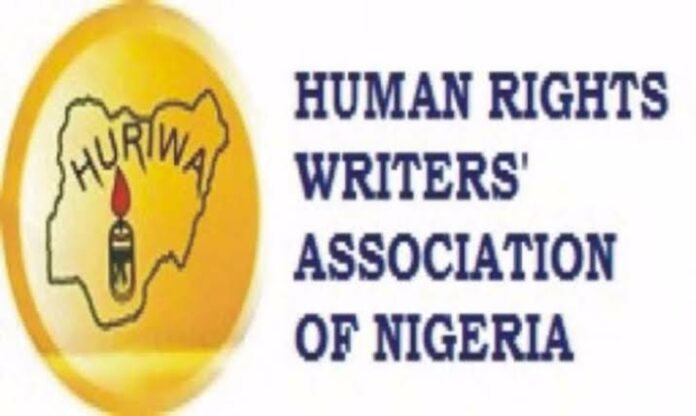 Human Rights Writers Association of Nigeria, HURIWA, has condemned the leadership of the All Progressives Congress, APC, for peging its presidential nomination form at N100 million and called for the arrest and investigation of anyone that buys the form.

Reacting to the release of APC nomination fees, HURIWA said in a statement by the National Coordinator, Comrade Emmanuel Onwubiko thatit is inconceivable that a citizen of Nigeria who made his money through legitimate means can afford to fritter away the princely sum of N100 million just because he/she wants to put himself out to become the servant of the people of Nigeria.

The group argued that only political rogues, drug peddling gangsters or persons involved in armed robbery or kidnappings for ransom can afford to gamble away such a lifelong fortune.

The Right group added that anyone who buys the nomination form at such a scandalous high amount of cash, should first be arrested by the citizens if possible under the law permitting citizen’s arrest so such a person is handed over to law enforcement agencies such as EFCC or ICPC or Police for investigation on the source of the money.

HURIWA has also warned that the irrational and criminally minded rationale for scaling up the cost of Presidential form to such a humongous amount as announced by the APC, will inevitably affect the value of the Naira giving that economic saboteurs who had siphoned public fund and warehoused the stolen money in dollar denominated currency will now bring them out to search for N100 million equivalence of the stolen dollars from public coffers to buy presidential nomination from thereby limiting the Naira in circulation for legitimate businesses.

“We were only just finished carpeting opposition Peoples Democratic party for bastardizing the process of nominating it’s presidential candidate by inflating the cost of nomination form to a princely sum of N40 million, little did we know that the politicians who run the Federal Government and have ruined the national economy will peg theirs at the extravagant cost of N100 million just to spite the opposition politicians and to make fun at Nigerians as captives who as hostages of politicians can’t do nothing to checkmate this rascality of the political forces.

“This same APC government is unable to meet the funding obligations for federal universities and there by have left millions of students of public schools to roam around in their homes due to industrial strike by university teachers (ASUU) ince over two months , yet the politicians have hidden enough stolen cash to buy presidential from at N100 million each.

“It is a shame that those who seek to govern Nigeria are made to cough out so much money to purchase forms just to signpost their original intention as persons whose only objective would be to first recoup their huge investments and to further impoverish the citizenry”.

“We urge Nigerians to initiate citizen’s arrest of anyone who buys the APC Presidential form at the rate of N100 million so the relevant law enforcement agencies are handed over these suspects to explain their source of such huge funds.”