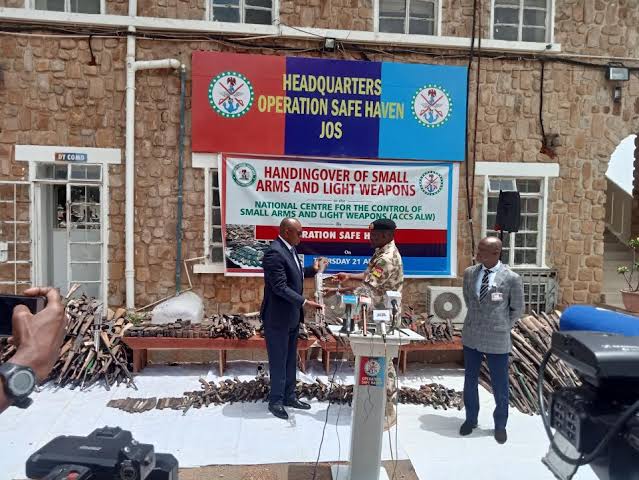 Operation Safe Haven( OPSH) deployed to restore Law and order in Plateau state has handed over 517 recovered small arms and light weapons from bandits and criminal elements within its area of operation.

Commander Operation Safe Haven and General Officer Commanding 3rd Division, Jos, Major General Ibrahim Ali, disclosed this on Thursday during a press briefing in Jos while handing over the small arms and light weapons to the Zonal Coordinator, North Central, National Centre for the Control of Small Arms and light weapons (ACCSALW), held at the Headquarters of Operation SAFE HAVEN, Jos.

Major Gen Ali said that the Operational successes recorded by troops of Operation safe Haven recently have led to the recovery of 517 small Arms and light weapons from criminal elements.

Gen Ali also used the opportunity to dispel the unfounded campaign of calumny trending on some social media platforms that he has been compromising and taking side with a particular ethnic group in the conflict between farmers and herders in Plateau.

He said, “Contrary to this falsehood, it is pertinent to note that as a member of the Armed Forces, I have sworn my allegiance to defend the country and protect the lives and properties of all citizens devoid of any ethnic, religious or pecuniary sentiments.”

Gen. Ali appreciated citizens who provided credible information that led to the success of the arms recovery and urged the troops to sustain the tempo in order to decisively curtail the activities of criminals elements in their joint Area of operation.

Receiving the weapons, the Zonal Coordinator, North Central, National Centre for the Control of Small Arms, Major Gen. Hamza Bature (Rtd) appreciated the troops and urged the public to always give necessary information to mop out illegal firearms from the hands of the public.

“I encourage the Operation Safe Haven to step up the tide to ensure that we recover all firearms from the society, knowing that we are moving towards the election and we want everybody to be on the same page.”

Gen. Bature expressed hope that more weapons would be recovered from the public as they continue to collaborate for the recovery of small arms and light weapons.