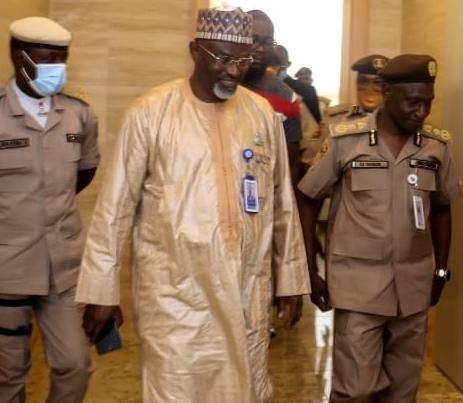 Mr Jere who has been on acting capacity was reconsidered by President Mohammadu Buhari for his efforts to reposition the service.

According to Coomassie, the new extension should give the CG more time to conclude the works he had started, like taking drastic action on the new passport policy introduced in February 2022 as acquiring Nigerian passport has now become a nightmare.

Amb. Hussaini Coomassie advised CGI Jere as he secured another one year extension to keep to his promise on staff welfare and other challenging issues that has engulfed the NIS.
According to him,”Within the last 7months of his appointment on acting capacity, Jere has restored hope to the service as well as clearing backlog of passports he inherited from the past administration. I pray that ALLAH see him through and may he be guided to lead by example,” he prayed.

He also advised the CGI to as a matter of urgency look at the issue of printing of Nigeria’s National Passport abroad, Malaysia to be precise and handling of residency permit by an Indian firm (CONTEC), which exposes the country to threats, while urging him to revisit the satanic agreement and possibly revoke or change the sensitive part of that agreement with immediate effect.

“For crying out loud, how can Nigeria allowed a foreign private company to produce her National identity (Passport) in Malaysia or an Indian firm controlling datas & Administration of Residence Permit?

“The contract with Indian firm, CONTEC Global, handling Combined Expatriate Residence Permit & Aliens Card (CERPAC) and SOCKET WORKS, IRIS TECHNOLOGY that handles Production of Nigerian passports in Malaysia & control of data base, were fraudulently signed to benefit some unpatriotic individuals who have no feelings for Nigeria, so Mr President should as a matter of urgency and National interest, set up a committee to keenly look into the affairs of these 3 evil sister partners and do the needful before he (Mr President) leaves office in 2023.

“I know there are some super powers behind their continuous operations but this should no longer be tolerated, they are gradually crippling the Services of Immigration, imagine despite the billions of dollars and naira generated by the NIS, no remittance goes to Immigration account but to JP Morgan and other private accounts, what an irony.

“The NIS still needs to revisit the issue of fake certificates used by some officers. It is most astonishing that these officers with fake certificates are the most favoured in selective promotions and postings, including foreign postings to our missions abroad, because of godfatherism which has BASTARDISED the service in recent years.

“Consequently, some officers have even tampered with their date of birth to elongate their years of service. When you see such officers physically, they look weary with schism all over and still claimed to have five or more years to serv. Why is the service knowingly ignoring these issues? We must follow this to a logical conclusion insha ALLAH. A stich in time saves nine. Any officer caught with such unpatriotic & criminal practice must have to be dismissed and prosecuted,” he concluded.