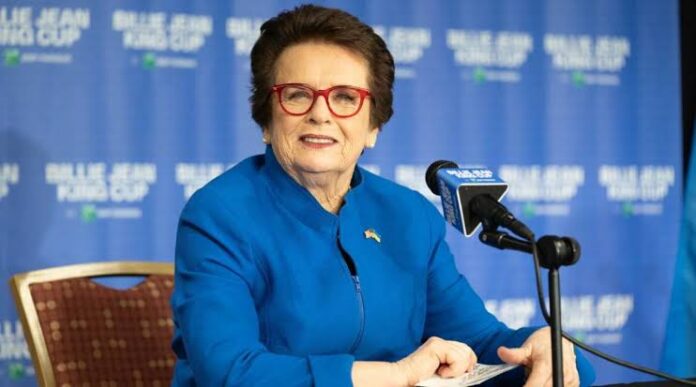 Billie Jean King has spoken out against the ban on Russian and Belarusian players imposed at Wimbledon this year as a result of the war in Ukraine.

The All England Lawn Tennis Club (AELTC) announced on Wednesday that players from the two nations would not be eligible for the grand slam.

Also, the Lawn Tennis Association (LTA) of England stated it would implement the same rule across all its upcoming tournaments.

Upon announcing its decision, the AELTC cited a responsibility “to limit Russia’s global influence through the strongest means possible”.

The blanket ban rules the likes of Daniil Medvedev, Andrey Rublev, Aryna Sabalenka and Victoria Azarenka out of contention, and that is something King is against.

She posted on Twitter: “The decision of the LTA and AELTC regarding Russian and Belarusian players at this year’s tournament was a difficult and complex undertaking, and I appreciate the challenges and pressures they are facing.

“One of the guiding principles of the founding of the WTA was that any girl in the world, if she was good enough, would have a place to compete.

“I stood by that in 1973 and I stand by that today. I cannot support the banning of individual athletes from any tournament, simply because of their nationality.

“Tennis is stronger when we stand together, and our continued support of the Tennis Plays for Peace initiative, which provides meaningful financial support and resources to Ukraine, needs to be our focus.”

The ATP and WTA criticised the AELTC’s decision, while Martina Navratilova and Novak Djokovic have also voiced their opposition.

In a statement published on Thursday, the Belarusian Tennis Federation (BTF) said it was seeking legal advice.

“The Belarusian Tennis Federation categorically condemns the decision taken by the organisers of Wimbledon to suspend Belarusian and Russian tennis players.

“Such destructive actions in no way contribute to the resolution of conflicts, but only incite hatred and intolerance on a national basis,” read the release.

“Throughout the history of tennis, armed conflicts have occurred in the world —- in Iran, Afghanistan, Syria, Yugoslavia and other countries —- but not until now have tournament organisers suspended athletes from the U.S., Great Britain and other countries.

“Illegal decisions of international tennis organisations in relation to our athletes undermines the reputation of these organisations.

“Consultations of the BTF leadership with international law firms on Sports law are ongoing and a strategy is being developed that is aimed at protecting Belarusian tennis players around the world.”