When Senators must build roads 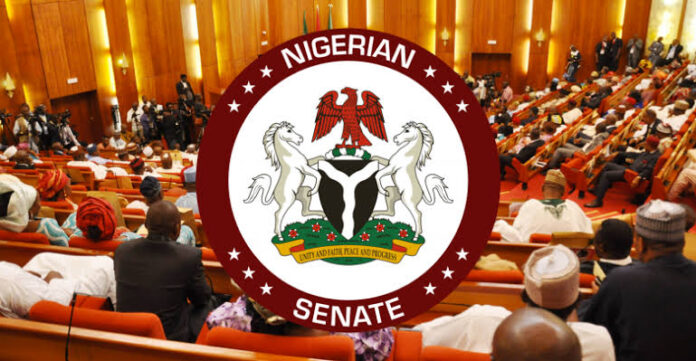 Just before the 2019 general election, debates flared up on how much exactly are the entitlements and emoluments that Senators and House of Representatives members gulp off the Nigeria’s annual budgets.

Nigerians asked probing questions about the salaries of Senators and their other colleagues in the house below because the usually media shy Federal revenue mobilisation allocation commission made a public statement saying that Senators and the House of Representatives members ought not to earn above what is statutorily fixed by the body.

The Revenue Mobilisation Allocation and Fiscal Commission, RMAFC, said, then in 2018 few months to general poll that only the management of National Assembly Service Commission, NASC, could explain how salaries and allowances of senators jumped to N13.5 million.

According to the commission, the total monthly entitlement of each senator still stands at N1.06 million

In a statement by its then spokesman, Mr. Ibrahim Mohammed, the commission pointed out that the clarification became imperative, in view of the recent revelation by Senator Shehu Sani that each senator collects monthly running cost of N13.5 million, in addition to the monthly salary of N750,000.

These debates about the convoluted and huge illegal salaries the legislature approved and is paying the members of the Federal Parliament had hardly died down when another debate about the way the members of the legislature handle what they have managed to build into the annual budgets called the constituency projects budget line. The debate was Sparked off when the Independent Corrupt Practices and Other Related Offences Commission revealed that it has discovered that several billions of Naira worth of public funds cornered by the National Assembly as constituency projects have been pocketed. ICPC then proceeded to publicise cases of mismanagement of constituency budgets by the legislators but the anti-corruption body hasn’t done much by way of bringing the wrong doers to face the full weight of the law but enjoyed the media visibility the reports gave them and no more.

However, one side of the coin is when a ranking Senator from Aba Abia State says the job of senators are unconnected with building roads. The other side of the coin is that we have seen some Senators distribute to their constituents in Bauchi, Katsina, Gombe and Anambra States their own share of constituency projects through massive economic empowerment initiatives such as giving them commercial bikes and buses.

But from Abia State also comes a shining example of a Senator who has done much more than all the other Senators out together to demonstrate that in as much as Senators are allowed to decide what their constituency projects should be, he has decided to build infrastructures like durable roads, schools and hospitals to the good people of Abia North Senatorial Zone who is also the Chief Whip of the Senate and a two terms governor of that state- Senator Orji Uzor Kalu.

The question to ask Senator Enyinnaya Abaribe is that why is he saying Senators don’t build roads but others who are also Senators are building roads and qualitative projects to serve the economic, health, educational and environmental purposes for their constituents who have over the years suffered deprivation and poverty? Is he and some others with such opinion aware that right within his own State, Senator Orji Kalu has demonstrated that Senators should build roads? We will shortly read from Senator Enyinnaya Abaribe who I hold in high esteem.

The lawmaker representing Abia South Senatorial District, Eyinnaya Abaride had explained that the basic job of legislators is not to build roads and construct boreholes as many members of the public wrongly believe.

Abaribe said this during a programme, ‘Open Square’ aired on Channels Television.

The lawmaker, who was responding to a question about the misconception about the role of the legislator, said the basic role is lawmaking.

“We borrow from the American system, representation of your people. And representation in this sense means that we can put things in the constitution for our people but our basic job is to make laws for the good governance of our people.”

Open Square is a town hall meeting. It was held on Saturday between lawmakers from the South East and their constituents.

The meeting focuses on addressing citizens’ understanding of the legislature, increasing engagements between lawmakers and constituents, as well as law-making and meeting the peoples’ needs, among others.

However, can I beg the kind indulgence of my good friend the Senator who said Senators don’t build roads to take rational note that Senator Orji Uzor Kalu has build concrete infrastructural projects to benefit his constituents.

Report says that relief has come the way of Aro residents in Arochukwu LGA of Abia-North as Senator Orji Uzor Kalu on Monday commissioned two major communal link roads which he facilitated in their community.

According to communal residents the newly completed Asphalt 2km, 3km interlink roads have been neglected for 30 years, with the road having a negative impact on the communities within the axis. The newly commissioned Asphalt roads form part of the 53 road projects expedited by Kalu, the Senate Chief Whip to the rural communities in Abia-North Senatorial District, some of which were recently inaugurated by the President of the Senate, Ahmad Lawan.

Addressing a Jubilant gathering during the commissioning ceremony, Senator Orji Kalu who was also a former Governor of the state 23 years ago explained that the road ought to have been built during his tenure as Governor but for the paucity of funds allocated to states as at that period of time. The Senate Chief Whip however, praised President Buhari for full implementation of the Nation’s budget. Kalu also thanked Buhari for acceding to his request to pay special attention to Abia-North as a reward for voting massively for the President during the 2019 Presidential elections.

“The narrative that President Buhari dislikes the Igbos is false, because these projects were made possible through him , so he is a great man. For the first time in the history of this country under President Buhari’s Dispensation our nation’s budget runs a complete cycle at 99% and he has ensured that every penny is released for implementation in the various sectors of our economy.

“This road is just the beginning because we have more projects for Arochukwu in this year’s budget. Politics aside I have a personal relationship with President Buhari for over 30 years , after the 2019 General elections I met with President Buhari and I told him that he must compensate Abia-North for voting massively for him because we are the only is on record that Abia North Senatorial zone is the only zone in the South-East and South-South that gave Buhari 68 per cent votes in the 2019 general elections.

Shedding more light on the state of other uncompleted roads in the community, Kalu a first time Senator explained that the Arochukwu to Ihechiowa roads hasn’t been completed due to the death of a former contractor who was initially awarded the road contract by the Federal Government, making it hard to br re-awarded to a new contractor. However, disclosed that he had a serious discussion with the Minister for works, Babatunde Fashola to resolve the matter to expedite the construction of the road.

The thrilled Residents in their separate addresses heaped praises on Senator Orji Kalu and President Muhammadu Buhari, just as they said that Kalu had made them realise that Legislatures had the capacity to facilitate infrastructural projects.

Hon Daniel Okeke a House of Representative Aspirant said , “we never knew Senators can build roads and also facilitate other key developmental projects; but we have a Senator who has made sure that indeed Senators can build roads. Be rest assured that your votes in Arochukwu are secured, just go and rest because we are solidly behind you.

President OUK for President, Joseph Udonkwo on his part said;” we travelled all the way from Akwa-Ibom to see for ourselves what we have been hearing about your good works in Abia-North. You have set the pace with your track record. There have been Governors in this state but none can match our record, in your first time at the Senate , you have done what others cannot do. If the Presidency is zoned to the South-east, you stand as No1 amongst others.

Another community stakeholder Ambassador Onu while thanking Kalu , recounted the difficulties experienced by the community prior to Kalu’s intervention.
“For 30 years this road was not motorable, motorists had to use other longer routes to get access to the right destinations which takes a longer period of time. But now the road has been constructed we can now drive smoothly. Orji Kalu told me specifically that he was going to construct this road if elected and in less than 3 years after election he had fulfilled his promise, he said “.

Principal Technical Secondary School, Arochukwu, Mrs. Comfort Onwuchekwa, expressed her gratitude to the Senate Chief Whip for his infrastructural projects which she said has been extended to the area of Education.

Her words” This road is in addition to your works in the area of Education, we are grateful for the textbooks , school bags and other learning materials that you have supplied to all the schools in Abia-North. We are grateful on behalf of all the Teachers. I say thank you.

So I say to Nigerians, soon these politicians will ask you for votes. Please ask the Senators to show you their report cards by way of how many infrastructural projects they attracted to your towns in the last four years and ask them for a transparent account on what they did with the constituency projects budgets. If these Senators insists that they are not supposed to build roads, show them the evidence that Senator Orji Uzor Kalu did a lot of projects in just over two years as a Senator. Or is he the only Senator in Nigeria?

…Onwubiko is a media and political Strategic Thinker based in Abuja.