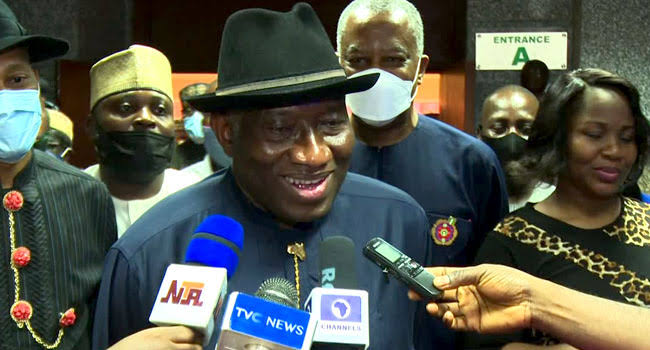 Ahead of the 2023 general election, former President Goodluck Ebele Jonathan has explained why he cannot declare to contest the Presidential election as there are still some processes ongoing.

A group under the auspices of Youth Compatriots of Nigeria (YCN) on Friday staged a match, calling on the former President Jonathan to join the Presidential race to complete what he started.

Addressing the group, Jonathan urged the youths to take advantage of the ‘Not Too Young To Run Act’ to participate actively in the electoral process.

He said he was aware that the group was there to ask him to declare, but he said: “I cannot declare because some process are still ongoing.

“Yes you are calling me to come and declare for the next election, I cannot tell you now if I will declare or not. The political process is ongoing, so just watch out. The key role you must play is that Nigeria must get somebody that will carry young people along.”

In his earlier address, spokesman of the group, Mayor Samuel pleaded with Jonathan for forgiveness, saying: “We were deceived and brainwashed by those who claimed they could do it in 2015”.

Samuel insisted that Jonathan should run on the platform of the Nigeria Peoples Party (NPP), saying that any political party that gives Jonathan its ticket is Pro- Nigerian people.

“We are calling on the man who has the feeling of the people at heart, the man of Goodluck to answer the call of the people to come and take the mantle of leadership, come 2023.

“We have tested those who deceived us that they are better, now our eyes are clear and we are pleading for forgiveness. Please answer the call and come and lead us again.

“Nigeria is in a state of no return, in a state of comatose, and we can’t continue like this. For the sake of children that are with us, pregnant women here and market women who left their businesses to come, we are pleading that you here their pleas. The voice of the people is the voice of God,” he added.