Perfect 10 for Bayern Munich as next Bundesliga title sealed 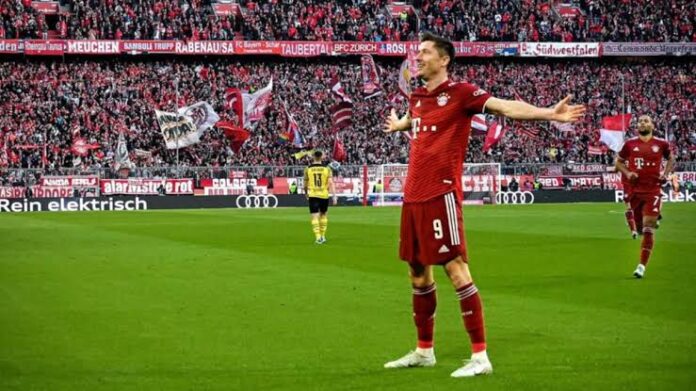 They thus became the first side in a major league to do so.

Juventus previously managed nine Serie A championships in succession but Bayern Munich are the first to have a decade of undisputed dominance in a leading division.

Bayern Munich have now won 32 German championships with 31 coming in the Bundesliga era from the 1963/1964 season.

A brilliant Serge Gnabry goal opened the scoring after 15 minutes, while Robert Lewandowski doubled the lead before the break.

In the second half, Borussia Dortmund cut the deficit through Emre Can’s penalty kick.

But in spite of goalscoring chances they could not find the equaliser needed to extend the title race, before Jamal Musiala ended matters six minutes from time.

Bayern Munich lead the table by 12 points with just three games remaining to give coach Julian Nagelsmann his first major honour in his debut season in Munich.

But while the personnel has changed in Munich over the last decade, the outcome of Bayern Munich winning the Bundesliga —— often with room to spare —- has remained constant.

Bayern Munich have not been at their best this season, as witnessed by their early exit from the German Cup and disappointing quarter-final loss in the UEFA Champions League.

But in over 31 games of the 34 match Bundesliga season they have remained untouchable.

“It was important for us in the end to finish it sensibly after the elimination against Villarreal”, Nagelsmann said, adding he remained “very ambitious” for the future.

Nagelsmann was showered in beer by his players, who danced on the pitch in front of their fans in the 75,000 sold-out crowd.

“The consistency of the club is exceedingly impressive,” said German federation president Bernd Neuendorf, who highlighted that it was the first title since 2019 celebrated in a full stadium due to the coronavirus pandemic.

They made the game tense and only a save from Manuel Neuer and block from Lucas Hernandez prevented Marco Reus levelling.

But that was in stark contrast to the first half Bayern Munich dominated and it was too little too late.

A corner-kick broke the deadlock when Leon Goretzka headed to Gnabry, who controlled with his thigh and volleyed into the top corner from the edge of the box.