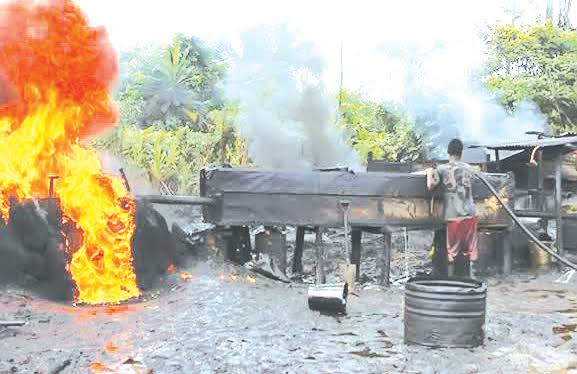 Host Communities of Nigeria Producing Oil and Gas (HOSTCOM) has been charged to complement government efforts in sensitizing people of the Niger Delta, particularly the youths on the environmental and health hazards associated with illegal bunkering and refining of crude oil.

Bayelsa State Deputy Governor, Senator Lawrence Ewhrudjakpo, gave the charge at the weekend when members of the Bayelsa State Executive and Elders Council of HOSCON paid him a courtesy visit at his office in Government House, Yenagoa.

Ewhrudjakpo, in a statement by his Senior Special Assistant on Media, Mr. Doubara Atasi, explained that, apart from the deleterious health effects caused by artisanal refining of crude oil, the menace also constitutes grave economic sabotage to the country and Bayelsa State in particular.

He further pointed out that illegal oil refining popularly known as “kpo fire” has claimed several lives, and therefore, called on the youths to resist the temptation of going into such criminal and hazardous activities.

The Deputy Governor, who condemned the call for legalization of illegal refining of petroleum products by some youths in the state, said HOSTCOM has a strategic role to play in the ongoing sensitization efforts of the government to discourage youths involved in the act.

He advised the pressure group to take it as an essential duty to educate the communities on how best to demand their rights from oil companies operating in their areas using legal means, instead of being unnecessarily confrontational.

Responding to the group’s requests, especially on the passage of the BYSOPADEC Bill pending before the State House of Assembly, Senator Ewhrudjakpo urged HOSTCOM to leverage on its over 1,200-community membership capacity to prevail on the Assembly to pass the bill into law.

The Deputy Governor, however, promised to convey their demands for a Toyota Coaster bus and the award of contract jobs to HOSTCOM to enable the body to raise capital for business purposes in the state, to Governor Douye Diri for consideration.