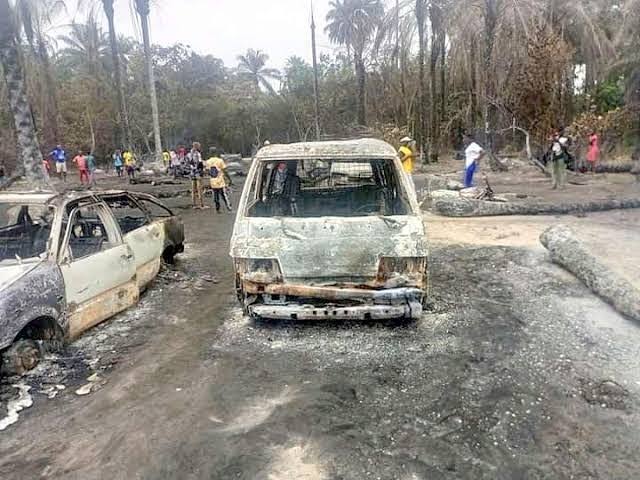 Death toll from the explosion that rocked an illegal oil refinery site in Abaeze community Ohaji/Egbema in Imo State last Friday has risen to 110, the National Emergency Management Agency, NEMA, has said.

Acting Head of Imo/Abia operations office of NEMA, Ifeanyi Nnaji, said more bodies were recovered in Orashi River, near the scene of the incident, while some were seen in various hospitals.

He said emergency workers in the state have been on the ground since the incident occurred to carry out rescue operations and evacuate the bodies, adding that arrangements are being made to carry out mass burial of the dead.

While stating that the cause of the explosion is yet to be ascertained, he appealed to the Federal Government to create an enabling environment for genuine business to flourish within the oil producing communities in Imo state.

This he said will discourage youths from engaging in illegal activities.

“Those who should tell the story and give insight to the incident are all dead, we are still on ground, we will soon come out with a report on the incident,” he said.

The NEMA Chief further appealed to oil companies in the area to assist the Government in job creation for their host communities.

Nigerian Pilot had reported that President Muhammadu Buhari in the wake of the explosion, ordered security agencies to intensify the clampdown on illegal refineries.

The President also asked security operatives to ensure that those responsible for the explosion are prosecuted.

Over the years, the Federal Government has been burdened with the activities of illegal refiners which is hitting hard on the country’s crude oil production. Between January 2012 to February 2022, Nigeria lost approximately $3.2bn to crude oil theft.