BMO commends Navy on success in fight against oil theft 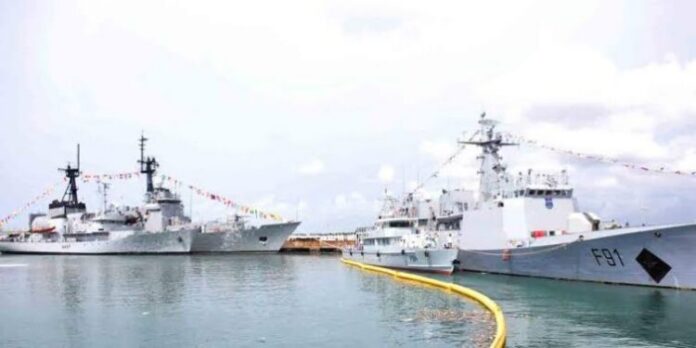 Nigerian Navy has been commended for its initial successes in the ongoing efforts to stamp out crude oil theft in the country.

Making the commendation, the Buhari Media Organisation, (BMO) said that the latest arrest and seizure of more than $700,000 worth of illegally refined products in the nation’s oil-producing areas is quite encouraging.

In a statement signed by its Chairman Niyi Akinsiju and Secretary Cassidy Madueke, the group said that this shows that the military operation launched against oil theft is yielding dividends.

“It is good to see that Operation Dakatar da Barawo launched by the Navy at the beginning of April in response to rising incidents of oil theft in the Niger Delta is recording major successes.

“Like all Nigerians, we found it embarrassing that the country was losing approximately 150,000 barrels of crude to oil thieves, according to the Nigerian Upstream Petroleum Regulatory Commission (NUPRC), which revealed that the development means that Nigeria was losing about $4bn annually, to criminals who illegally tap pipelines.

“So it is against this backdrop that the Naval authorities launched a three-month operation involving about 40 warships, 200 gunboats, five helicopters and the deployment of men of the elite Special Boat Services in order to stem the tide of this criminality.

“Now, within a few days of the operation, there have been multiple interceptions in the creeks, of boats loaded with illegally refined Automotive Gas Oil (AGO or diesel), as well as the marine boats that were providing escort services.

“The Navy also confirmed the seizure of one MV ROYAL DIADEM laden with a huge quantity of suspected illegally refined AGO at Bonny area, without appropriate documentation from the point of loading

“This shows clearly what the authorities are up against, and we hope the Navy will continue to live up to expectations of well-meaning Nigerians who are shocked at the magnitude of oil theft in the oil-producing areas in recent times”, the statement said.

The group added that the President Muhammadu Buhari administration has made enough provision for the Navy to be able to check the activities of criminals in the nation’s territorial waters.

“Since 2015, the Nigerian Navy, on the watch of President Buhari, has acquired close to 400 new platforms including 14 houseboats, four helicopters, four capital ships, 12 manta class/inshore patrol craft, and 22 fast attack boats, among others.

“So it did not come as a surprise to us that the Navy could deploy 40 ships and 200 gunboats as part of the operation against crude theft.

“This shows that they have enough firepower to man the region and Nigerians expect the naval personnel deployed there to live up to expectations and stem the tide of economic sabotage in the oil-producing areas”.

BMO also expressed hope that at the end of the operation in June, cases of massive oil theft in the country would be a thing of the past.