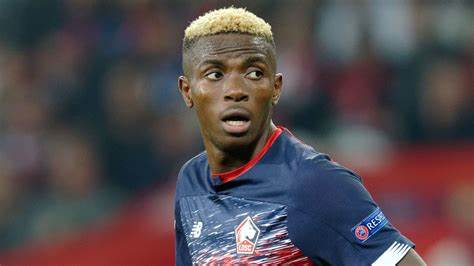 Super Eagles of Nigeria and Napoli of Italy forward Victor Osimhen has sensationally favour a switch to the Emirates Stadium even as Newcastle are said to be mounting pressure on the striker to consider a move to St James’ Park.

The former Golden Eaglets of Nigeria hit man is reported to have indicated interest to move to North London if the Gunners can raise the €100 million, about £84million or $107million require to price him away from Serie A.

Arsenal remain in the hunt for a proven striker heading towards the summer transfer window, and according to report, Arsenal have been in contact with representatives of Napoli Star.

Arsenal, according to report are set to quoted £84million to sign the Napoli striker this summer.

The price could make life difficult for the Gunners, but they have been dealt a boost as reports indicate that the Serie A goal machine would favour a move to north London over Newcastle United..

To this end, Manager Mikel Arteta may have to convince the Arsenal board to shell out this summer if he is to land the club’s top targets should they qualify for the Champions League.

According to Freddie Paxton, a journalist hinted that the Gunners hold a serious interest in the forward after making contact with his agent, and that the player would rather move to the Emirates than St James’ Park.

Napoli paid a princely £70 million to bring Osimhen to Italy from Lille in 2020, hence they are demanding an increased fee to let him go.