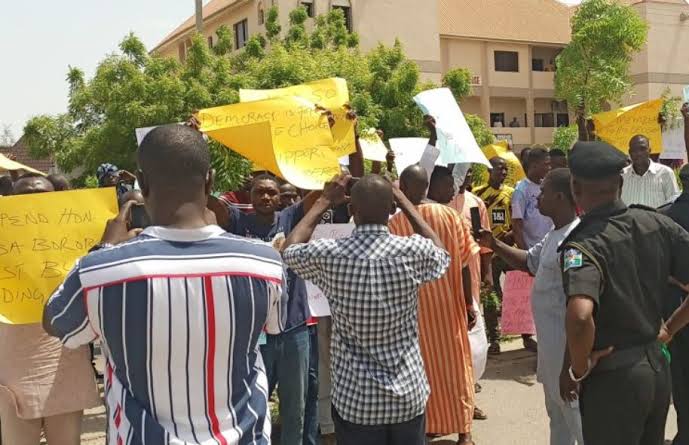 Hundreds of angry youths on Tuesday protested and barricaded the entrance of the Adamawa State House of Assembly over perceived moves by the House to declare the seat of Hon. Joseph Ayuba Kwada, member representing Michika Local Government State Constituency vacant following his recent defection from the Peoples Democratic Party (PDP) to join the All Progressives Congress (APC).

The angry Youths in their numbers were seen at the entrance of the State Assembly Complex carrying placards with various inscriptions.

The youths insisted that they will not allow the moves by the House to declare the seat of Hon. Ayuba vacant adding that if the House intends to do justice, it should also declare vacant the seats of some members who defected from APC to join the PDP even before Ayuba’s defection.

However, during the plenary, the Speaker, Hon Aminu Iya Abbas while reading the agenda on the floor of the House did not mention anything close to declaring Hon Ayuba’s seat vacant.

But a member of the House who spoke on condition of anonymity told our correspondent that “it was true that the House wanted to declare the seat of Hon Ayuba vacant sequel to his recent defection from the ruling PDP to APC“.

Every attempt to get the Speaker to react failed as he refused to speak on the issue.

At the time of sending this report, the police have deployed some of its personnel to protect the Complex of the House of Assembly.

Meanwhile, the Director-General, Media to Governor Ahmadu Umaru Fintiri of Adamawa state, Mr. Solomon Kumangar on Tuesday said the defection of the member representing Michika state constituency in the Adamawa state House of Assembly, Joseph Ayuba from the ruling PDP was a great relief to the party.

The DG said Mr. Joseph was always in opposition to the ruling party, who used his position as a member to frustrate the workings of the government.

Kumangar, in a statement, said Fintiri has an inbuilt electoral value as PDP had few or no members in the Adamawa state House of Assembly before the coming on board of the governor, wondering why Joseph Ayuba’s defection will rattle the governor.

“This fellow Joseph Ayuba rode on the electoral value of the governor to win election into the Adamawa state House of Assembly, how can his defection make one lose sleep? We all know of his desperation to contest for Michika/Madagali Federal Constituency which according to him is responsible for his defection.

He however advised APC to prepare for the implosion that will befall the party in Adamawa.

“Defection is not the problem, but managing the ambition and sharing of political office will scatter them, Mr. Joseph had become the greatest obstacle to the government”, he said.