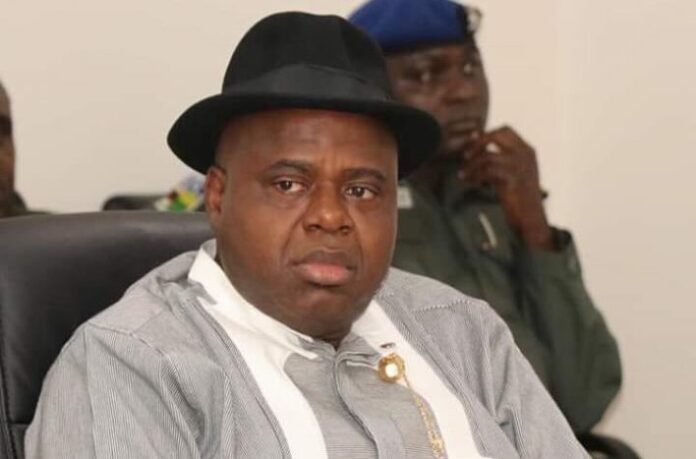 Gov Diri who spoke during the 73rd executive council meeting, at the chambers, Government House, Yenagoa said, “I like to appreciate all of us who have committed our time to ensuring that we lead our State in these trying times towards prosperity, peace, unity and security.

“Just last night, we had a security challenge, which is very historic. In the history of the politics of our State, we have never been known to assassinate each other. A very prominent APC chieftain in the person of Sunday Frank-Oputu was assassinated.

“I like to tell all of us who are players in the development and growth of our State, that killings will not settle scores, and that we cannot hand down a State that will be a murdering field to our children. Let us build our brothers and sisters, not to kill under whatever guise.

“On behalf of the Prosperity Government and the people of the State, we send our heartfelt condolences to the family. We have put the security on their toes to immediately go after the sponsors and assassins. Our State has been very peaceful, and a place where all political parties are accommodated, and there is no reason whatsoever for anybody to take the life of another man.”

Meanwhile, the Bayelsa state police command said it has charged operatives to intensify efforts to identify and arrest the perpetrators.

A statement by the Police Public Relations Officer, SP Asinim Butswat, re-assured members of the public on the command’s resolve in ensuring the culprits are arrested and brought to book.

He said, “on 26 April 2022, at about 2300 hours, gunmen scaled the fence and gained access to the residence of Hon. Frank Oputu located at No. 1 Jonah Road Bay- Bridge, Kpansia, fired several shots at the Honourable through the window of his bedroom and fatally injured him.

“The injured victim was rushed to Federal Medical Center, Yenagoa, where he was confirmed dead.The corpse has been deposited at the mortuary for autopsy.

“The Commissioner of Police Bayelsa State Command CP Ben Nebolisa Okolo, has charged officers to intensify efforts to identify and arrest the perpetrators. He further re-assures members of the public on the Command’s resolve at ensuring the culprits are arrested and brought to book.

“The Command urged members of the public to remain calm. Investigation is ongoing.”

Nigerian pilot report that, a chieftain of the All Progressives Congress (APC) in Bayelsa State, Chief Sunny Frank – Oputu was reportedly killed by unknown gunmen