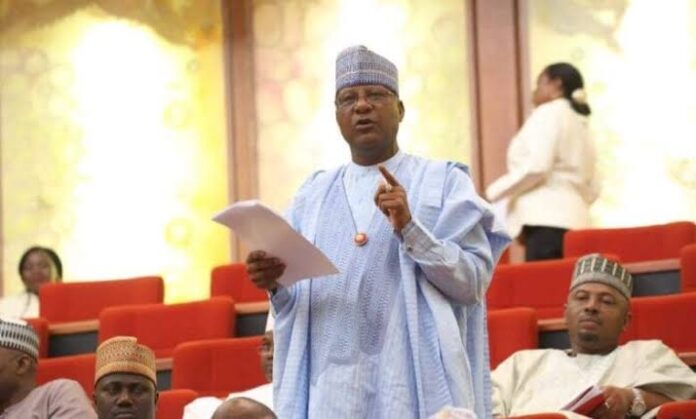 Specifically, the Minority Whip, Senator Philip Aduda (PDP FCT) and Uche Ekwunife (PDP Anambra Central), kicked against the defection and made attempts to stop Senator Danbaba, arguing that there’s no crisis in the opposition party, adding that he must vacate his seat if he insisted on abandoning the party that gave him victory to the upper legislative chamber.

Relying on the provisions of Section 68(g) of the 1999 Constitution (as amended), Senator Ekwunife requested that the seat of Senator Danbaba, representing Sokoto South be declared vacant.

The lawmaker, who rose via a point of order of the Senate Rules, vehemently kicked against the erstwhile Deputy Minority Whip’s action and the argument dragged for many minutes before she was ruled out of order by the Senate President, Dr. Ahmad Lawan.

Senator Danbaba had, through a letter read by the Senate President, informed his colleagues of the decision to dump the PDP and join the ruling APC.

The lawmaker, in the letter, explained that his decision to leave PDP was informed by the lingering and multifaceted crisis at the zonal level of the party.

The letter reads: “I write to formally inform you and distinguished colleagues of my decision to join the All Progressives Congress, APC from the Peoples’ Democratic Party, PDP.”

“My decision is anchored on the continuing multifaceted crisis that has bedeviled the PDP, especially at the zonal level which has created not only credibility problems, but has undermined party discipline, cohesion and focus.

“The situation at the state level has not helped matters either as depicted by lack of political sanity, focus and credible leadership.

“I have in APC, the political ideology in consonance with my personal political philosophy. This Ideology also seems the best suited to meet the expectations and aspirations of my constituents.

“While thanking you, Mr. President, please accept the assurances of my highest consideration.”

In his ruling after the heated argument generated by the defection, the Senate President said the reasons advanced by Senator Danbaba were valid and excusable under the law.

It would be recalled that Senator Danbaba was nominated by the PDP on July 15, 2022, for the position of Deputy Minority Whip, following the defection of the former Deputy Whip, Senator Sahabi Alhaji Ya’u, representing Zamfara North from the PDP to the APC.

With Danbaba’s defection, the APC now boasts of a total number of 71 Senators while PDP has 37 and the Young Progressives Party, YPP with only one.