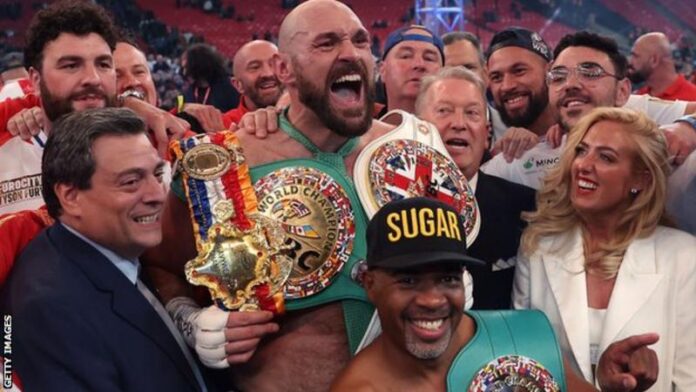 WBC heavyweight champion Tyson Fury has confirmed he is “done” with boxing.

The 33-year-old British fighter had hinted at retiring after the sixth-round knockout of Dillian Whyte in front of 94,000 fans at Wembley on Saturday to retain his title.

Speaking to Piers Morgan’s TalkTV show on Wednesday, Fury said he was deciding to leave boxing behind to spend more time with his family.

“Like the great Roman leader said, there will always be someone else to fight. When is enough, enough?

“I am happy, I am healthy. I still have my brains, I can talk, I have a beautiful wife, I have six kids, umpteen belts.

“I have plenty of money, success, fame, glory, what more am I doing it for?”

Fury is unbeaten in 33 bouts and retirement would mean he would miss out on an opportunity to fight for the undisputed crown and with it a chance to cement his status as Britain’s greatest ever heavyweight.

Writing in his BBC Sport column on Sunday, BBC Radio 5 Live boxing analyst Steve Bunce said he would not be “totally surprised” if Fury walks away from boxing but added that it is “complex”.

Oleksandr Usyk currently holds the other four world heavyweight belts and he is set to defend those titles against Anthony Joshua at some point, with the details of that fight said to be in “the final negotiations”.

It was then expected that the winner of that bout would look to take on Fury to unify the division for the first time since Lennox Lewis achieved the feat in 1999.