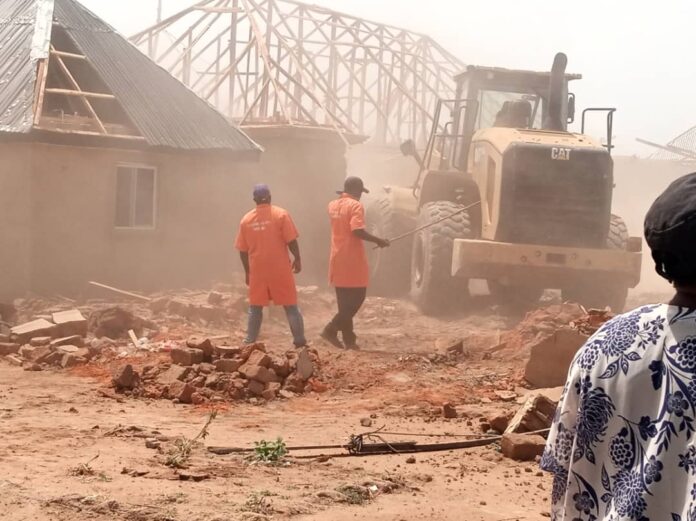 The Senior Special Assistant on Monitoring Inspection and Enforcement to the minister of FCT, Ikahro Attah, while speaking to journalists at the venue, again reiterated the fact that local Chiefs do not have right to sell land and people should stop buying land from them.

According to SSA, “For me I don’t think I can quantify the house, there are Development Control workers who are taking note but I can say over 600 illegal structures were pulled down.

“The Minister has issued that warning times without number, we paying a Kobo, they have gone against the urban and regional planning acts . They have violated the law. It cost the administration money, hours and manpower to clear them.

“We are not paying any compensation because they violated the law building illegal structures. We are not done with Zamani community, we have a city to protect. Someone came to offer bribe and the man spoke a language close to my own I refused, later the indigenous people came and claim the house is theirs but I said no because someone already came to offer me bribe and I refused.

“They showed us some houses that were not their own.

“No chief has right to sell land. Even the ones Area councils allocated always go back to FCDA for recertification.
All the Chiefs even denied selling lands, they said they never sold land,we met them about three weeks ago and said the the land that were sold by people who are farming and the people farming said the land they sold were their farm land. And they turned their farmland into house that has no building plans” .

The SSA noted, “What is really painful is that we suspended work on Monday in order to allow people to pack but most of them did not do what they should have done. Some persons are thinking Government is not serious but they should have known that FCT Minister is really committed in restoring the Abuja Master plan , especially to rid Abuja of illegal structures”.

On complaints from the non indigens, “I understand with them really bitter, I understand how painful it is but the sad thing is that they were not suppose to have been in that state at all.
The Minister has warned severally that the locals should stop selling land and the non indigiens should also stop buying land from them. What most of them do not know is that the indiegens have rights and they are due for resettlement and compensation” .

Director, Development Control Department, Murkhtar Galadima, who was physically present to supervise the work warned his staff against taking any bribe from any person, that he will not hesitate to use the civil service rule.

“Today, we have worked more than two days ago obviously and today we have over 615 illegal structures that were removed.

“I have been hearing from some people that they allegedly contributed N100,000 to stop their houses being demolished but the work still went on. Anyone who gives or collect money is at his own risk because we will still do our jobs,

Apart from the fact that we are going to apply the civil service rule, the person if caught might lose his job. Because this is serious work “.

Bamidele Taiwo, one of the victims said he about 7 years ago and bought a land from the Chief, “My house was affected even now all my family are outside with all my luggage.

“We later heard that it is people that didn’t settle them that they are demolishing their houses.

“It is the indiegens that are pointing to houses for demolition. Some the house that were not demolished are not for indigens”.

Bolaji Ganiyu, who is also a resident of Zamani that was affected by the demolition said, “I bought land from the Chief of Zamani for N100,000 and didn’t tell us about indigien or non indigen. Now they removed our houses and all our properties are outside. When the house was marked we went to meet the Chief the Chief told us to meet Chief of Jiwa and we went to meet him and we even went to Humanright Radio for them to plead on our behalf to give us at least 6 month notice but they refused”.

On leaving the indigenous houses, “I am not happy that they didn’t demolish the indigenous houses, after all they sold the land to us and we are all Nigerians. Where I come from in Oyo State, whatever they do to indigiens that is where they will do to non indigens. It was my friend that bought the land for N100,000. And they didn’t tell us that it was an illegal land. Some people bribe the indigiens, they left some houses. We are fast, at least in the spirit of Ramadan, they could have left it till after fasting. Now during election they will say we are one, which is a lie”.