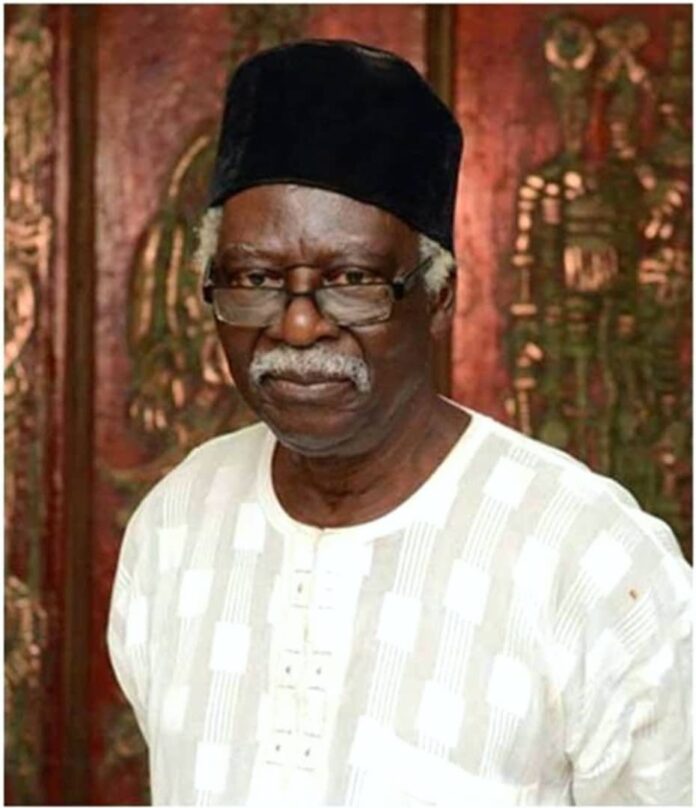 Dr. Bruce Onobrakpeya was born in Oghara, Agbarha-Otor, Delta State on August 30, 1932. He studied art at the Nigerian College of Arts, Science and Technology (now Ahmadu Bello University) Zaria, and graduated in 1962 with a degree in painting.

Before proceeding to Zaria, he was already recognised as having the potentials of a great artist, and was made the art teacher in various secondary schools such as the old Western Boys’ High School, Benin City and Ondo Boys’ High School, Ondo.

After Zaria, he worked briefly as an intern with Dr. Ben Enwonwu before proceeding to St. Gregory’s College in 1963 as the art master till 1980. Here he nurtured successive generations of art students, some of whom have grown to become famous names in the field of Art.

In addition to the teaching profession, he found time to practice art, and attended the famous art workshops organised by the German ethnographer, Ulli Beier at Osogbo, Ibadan and Ile-Ife, and the Haystack Mountain School of Arts and Craft at Deer Isle, Maine, United States of America.

His studio experiments (particularly in the area of printmaking) led to discoveries, which attracted art students, researchers, and collectors. His studio soon became the place for industrial training, artist-in-residence, researches and documentation programmes.

In response to the increasing demand for these programmes, Onobrakpeya started to develop the Niger Delta Cultural Centre in Agbarha-Otor (Now Onobrak Art Centre). The Centre has since 1998 hosted his dream project—the annual Harmattan Workshops for visual arts. The Workshop attracts visual artists from across and beyond Nigeria.

Onobrakpeya at different times worked in Nigeria, Zimbabwe, the United Kingdom, the United States of America and Canada where his services were in demand as artist-in- residence or guest instructor.

He has held several exhibitions in Nigeria and around the world where honour and recognition has come to Nigeria as a result of his outstanding performances. His works, much written about by scholars around the world, have become the most fitting and prestigious gifts for visiting head of states and royalties around the world.

His works are to be found in public collections in the presidential villa in Abuja, universities, churches and galleries in Nigeria. They are also in places like the Vatican Museum in Rome, the National Museum for African Art, Smithsonian Institution, Washington D.C, the collections of statesmen and celebrities around the world, past Nigerian heads of state, Her Majesty’s Consort, Prince Philip of England, etc.

He collaborated with Nigerian writers like J.P. Clark, Chinua Achebe and Wole Soyinka whose works he illustrated for adults and children.

Bruce Onobrakpeya is the recipient of the British Council Award (1969); the Pope Paul VI Gold Medal for participating in an exhibition to commemorate the Pope’s 80th birthday celebrations (1977); the Fulbright-Hays Award (1979); the 5th Triennial India Silver Medal (1982); the Asele Institute Certificate of Honour (1985); the Solidra Circle Award (1985); Fellowship of the Society of Nigerian Artists (1989); Honorary Degree of Doctor of Letters (DLT), University of Ibadan (1989); the Classique Magazine Star Award of Achievement for contributing immensely to society (1990); the Bendel State Merit Award (1990); the Delta State Merit Award for Excellence in Arts (1995); the Masters’ Award (1999); Member of the Federal Republic, MFR, (2002); the 2006 Living Human Treasure Award by the Federal Government of Nigeria and UNESCO; the Grand Prix African Printmaking Award from Versailles, France, the SPANFEST Excellence Award – Lifetime Achievement Award in the Art, November 2013 etc.

He has participated in several exhibitions in Africa, Asia, Europe and the Americas since his first one-man Exhibition at Ughelli, Delta State, Nigeria in 1959. (and still counting) These include the tour exhibition Ore Idjubili Exhibition shown at the Nike Art Gallery, Lekki, Lagos 2012, Department of African Studies, University of Ibadan, and 2012 University of Benin, Ugbowo Campos, Benin city; 2013 and Jewels of Nomadic Images, Skoto Gallery, New York, 2012.

The legacy of this outstanding artist may perhaps be better appreciated when one considers that he is listed in various international publications such as the World Encyclopaedia of Black Peoples; the Spectrum Encyclopaedia for Schools; the International Who’s Who in Art and Antiquities; and the New Czechoslovakia Encyclopedia, The News magazine People in the News survey of 100 outstanding Nigerians of the 20th century among others.