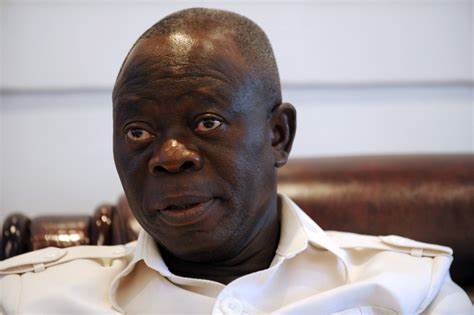 Oshiomhole, also former National Chairman of the All Progressives Congress (APC) declared his intention on April 4, to contest for the Edo North senatorial district seat on the platform of the APC.

The two former commissioners issued a joint statement in Benin on Thursday, pitching their tent with incumbent Sen. Francis Alimikhena and pledging their support for his re-election.

The statement was personally signed by James, Oshiomhiole’s kinsman and Mrs Idehen whom Oshiomhole dropped from his cabinet in June 2012, one month to the governorship election in Edo.

They submitted that the re-election of Alimikhena, instead of replacing him with Oshiohole would guarantee a bigger deal for the senatorial district.

“Edo North APC youths should work in synergy with their respective leaders to ensure victory for Sen. Alimikhena.

“To show the seriousness attached to Alimikhena’s re-election, his campaign organisation has been strengthened and our principal is the first to obtain the Expression of Interest and Nomination forms,’’ the statement read.

It quoted Idehen as saying: “at my age and with my pedigree, I cannot deceive my own people. I owe it a duty to lead rightly and Alimikhena is the right person for 2023 Senate.’’

She urged the people to do the right thing by nominating and supporting Alimikhena for another term of office.

Reacting to the statement, a leader of the APC in Akoko-Edo, Mr Ayo Olowojoba, said support for Oshiomhole would drag the senatorial district backward.

“We cannot be dragging Afemai backward by allowing a new person to go to the senate. We will deliver Alimikhena with our unity, especially the Owan and Akoko-Edos,’’ he said.