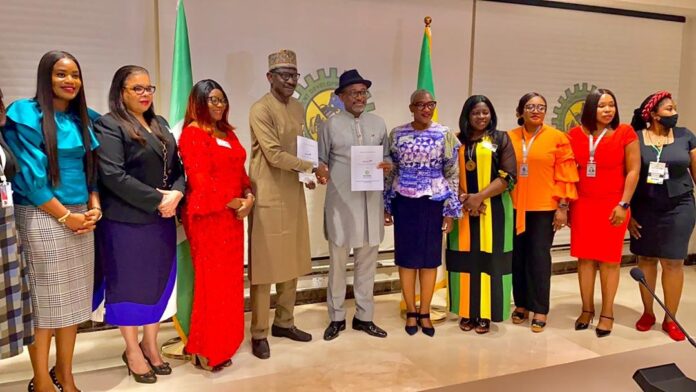 Executive Secretary of the Nigerian Content Development and Monitoring Board, NCDMB, Engr. Simbi Kesiye Wabote has said on Wednesday that women entrepreneurs in the Nigerian oil and gas industry should break barriers by taking advantage of the $40m fund created specifically for them under the Nigerian Content Intervention Fund, NCI Fund.

Wabote spoke at the annual general meeting of the Oil and Gas Trainers’ Association of Nigeria, OGTAN, held in Abuja with the theme “Diversity & Inclusiveness in Human Capital development for the Energy Sector.”

Noting that that unavailability of funds was one of the key challenges that often hinder the participation of women in the oil and gas activities, the Executive Secretary stated that the Board had addressed the issue through the NCI Fund.

“To provide a fair chance for women in the oil and gas industry, the Board partnered with the NEXIM Bank to establish a $20 million fund that was matched with an additional $20 million fund by NEXIM bank, making the total pool of funds available to women in oil and gas to be $40 million,” he said.

He explained that the Board and its partners have introduced and implemented several initiatives that promote diversity in the oil and gas industry.

Some of those gender-focused interventions were being implemented in partnership with the Bank of Industry, BoI, while others were facilitated by the Nigerian Export-Import Bank, he added.

According to the Executive Secretary, another step taken by the Board to drive diversity in oil and gas activities was the setting up of the Diversity Sectorial Group in the Nigerian Content Consultative Forum, NCCF.

He added that “the Board has also organized events that were targeted at women and community activities to promote inclusiveness.

He mentioned that NCDMB’s efforts to lead the womenfolk into the mainstream of the Nigerian oil and gas industry was recognized at the 5th Nigerian International Energy Summit this year when the agency was bestowed with an award of the “Best Gender Support Company in the Energy Space”.

He also confirmed that the Board’s Human Capacity Development model has no gender bias as it was inclusive and provides equal opportunities to all applicants and beneficiaries.

He hinted that NCDMB had put in place the 60-20-20 training model in which 60 percent of the training resources provided by the Board and the industry are devoted to providing young Nigerians with specialized skills they need to secure employment.

He stated that “under this component of the model, beneficiaries are provided with qualitative skills and international certifications that will position them for employment within and outside Nigeria.”

He also informed that 20 percent of the training spend was geared towards improvement in the productivity of already employed personnel while another 20 percent of spend on training is used for trainings on soft skills.

The Executive Secretary assured that the Board will continue to develop female members of staff to occupy key positions in preparation for higher leadership roles as well as continue to promote Human Capacity Development across various spheres of the energy sector, including skill development and entrepreneurship programs and STEM development across secondary and tertiary institutions to prepare youths for the future.