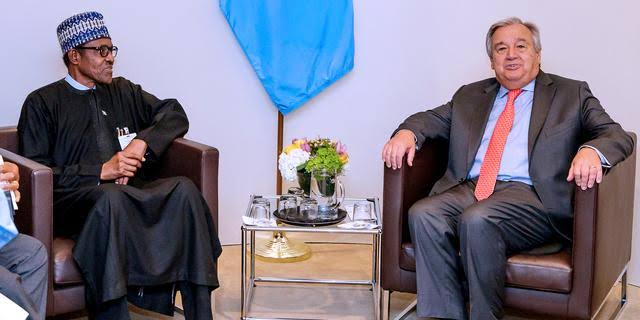 UN Secretary General, Antonio Guterres, will begin a Ramadan solidarity visit to three West Africa countries, Nigeria, Senegal and Niger beginning on Saturday, expecting to be in Nigeria on Tuesday.

Deputy Spokesman for the Secretary-General, Farhan Haq, told newsmen on Friday in New York that Guterres would visit the countries for his 2022 annual Ramadan visit.

The secretary-general began annual Ramadan solidarity visits when he was High Commissioner for Refugees, but the tradition was interrupted by the COVID-19 pandemic.

Fielding questions on if Guterres will use his visit to highlight the insecurity challenges in Nigeria, Haq told the News Agency of Nigeria (NAN) correspondent that he would express solidarity with victims of terrorism in the country and the region.

The spokesman said the UN chief would talk about insecurity in Nigeria and throughout the Sahel, noting that he would highlight the impact of the Ukraine war on the African continent.

“However, at the same time, the Ukraine crisis does have an impact on the African continent, including through higher food prices and other challenge.

“He wants to discuss those challenges with the leaders with whom he is meeting,” he said.

Haq, had earlier briefed newsmen on the agenda of Guterres in the three countries.

“On Saturday evening, he expects to be in Senegal. Then from there, we expect him to travel onwards on Monday to Niger and then on Tuesday to Nigeria,” Haq stated.

He said the secretary-general would meet and share an Iftar dinner with President Macky Sall of Senegal, who assumed the presidency of the African Union earlier in 2022.

“He will also take part in Eid celebrations with President Mohamed Bazoum of Niger and he is scheduled to meet President Muhammadu Buhari of Nigeria.

“In the three countries, the secretary-general will have meetings with senior government officials as well as civil society representatives, including women, youth groups and religious leaders.

“He will meet families deeply affected by violence and instability in the Sahel, including people internally displaced and refugees,” the spokesman said.

In addition, he said Guterres would also see first-hand the impact of climate change on vulnerable communities and will assess progress and challenges to the COVID-19 recovery.