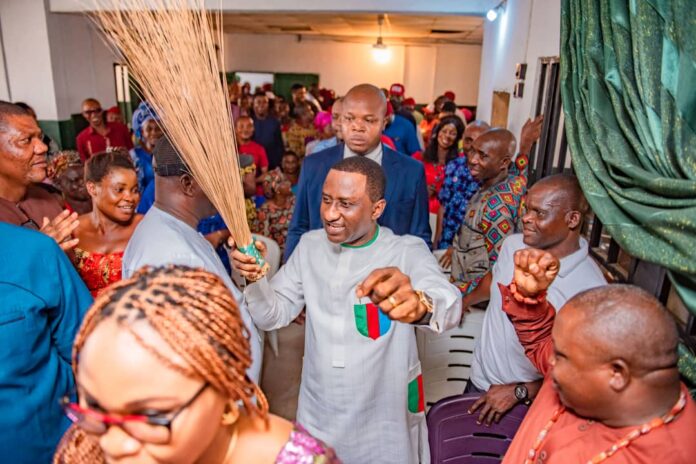 The Minister of State Mines and Steel Development, Dr. Uchechukwu Sampson Ogah during his declaration to contest as Governor of Abia State in the 2023 Gubernatorial Election at the APC State Secretariat Umuahia, on Friday, 29th of April 2022.

Minister of State Mines and Steel Development, Dr Uchechukwu Sampson Ogah has declared his intention to run for the Office of Governor of Abia State on the Platform of the All-Progressives Congress, APC, to deliver Abia and Abians from the dearth of infrastructural and human development and take Abia from “as it is” to “as it ought to be”.

Ogah made the declaration of his interest to be the next Governor of Abia State come May 29th 2023, at the APC State Secretariat, Umuahia, Abia State, on Friday 29th, April 2022.

He noted that his decision to contest to serve as Governor was hinged on his love for Abia State and his firm commitment to achieve a vision of Rapid Transformation of Abia adding that, his experiences, together with successes both in the Private and Public Sectors, as well as being the largest employer of labour in Abia State, after the state government, has equipped him to better serve the state as Governor.

The Minister stated that as an entrepreneur, he braved the odds and sited one of the Eastern biggest Industrial clusters called MASTERS INDUSTRIAL CITY in his hometown, Onuaku, Uturu, for job openings and wealth creation for his people as well as Masters Energy Agricultural, City, MEAC, in Abia State: hectares of land acquired for massive agricultural development in line with Federal Government’s Transformational Agenda.

This huge multi -dimensional project he said, is an all-integrative agro-allied venture that provides jobs, foreign exchange, knowledge transfer, investment opportunities and food security in Abia State, all geared towards provision of employment opportunities, wealth creation, economic and social boost to the state economy and lots more. In his words “either as an entrepreneur or a public official, I create employment”

His words “I have lived a life of the fear of God and I plan to bring it on board to
reset a new value orientation for governance, anchored on Excellence, Professionalism and Ethics.”

Continuing, he disclosed that as Governor, and under the Social Transformation Pillar, the government will provide “a Hi-5” Public Policy drive of: Economic and Infrastructural Development, that would help to re-invent the era when the Eastern region dominated central African Markets because of the commercial city of Aba and spicing it up with sprawling industrial clusters across Abia State, thereby creating enough jobs for the people, ensure massive critical infrastructural development as well as a sustainable and environmentally friendly smart cities and villages in line with the original masterplan; Agricultural and Rural Development.

He stated that his government will revive several moribund farm settlements in Abia State as a step towards re-enacting agricultural revolution that will guarantee food sufficiency, creation of labour, export of agricultural produce and earning of forex to further boost internally generated revenue for the benefit of Abians.

Also he said when given the mantle to Govern Abia State, his administration will provide Qualitative Health Care Delivery stating that there was urgent need to revamp the health-care system in Abia State through the provision of functional, staffed and motivated health-care facilities across State.

He noted that his government
will see to the reduction of maternal and child mortality rate; Under the Educational Transformation Scheme, he revealed that the education system will revolve around
Science, Technology, Engineering and Mathematics, STEM, constant revision and updating of curricular, motivation and prompt payment of teachers salaries and allowances.

Speaking further, on Security Reform and Crime Control, the Minister assured of the use of technology to fight crime and ensure security of lives and properties in Abia.

His words. “our government shall partner with security agencies for optimal delivery of security of lives and properties. Security vote shall be strictly utilized for what it is meant for. Our socio-economic programmes in agriculture, skill acquisition schemes and entrepreneurial endeavours shall be effectively deployed to engage our idle youths towards sustenance of peace and security in Abia State. Abia shall be the safest place to live and work in as well as the most secured investors’ haven in Nigeria”.

He noted that standing on this two cardinal capitals, as Governor, Abians will see for the first time, visible changes within his first 100 days in office.

He said “We shall re-invent a government of human face, even as our policies and programmes shall be pro-people all through. The welfare of the people shall be accorded priority”

Dr. Ogah declared that he has a dream that Abia will be a state sprouting on the rule of law, justice, and honesty of purpose.

“A State with zero-tolerance for corruption, nepotism and sectarian ineptitude. A state where hard work and merit are celebrated in the open space.The Abia where its citizens will enjoy critical infrastructure such as good roads, water and uninterrupted power supply. Where technology will power the new Abia economy, raise visible smart city hubs by hundreds of young people and help the state fulfil all indices of the Sustainable Development Goals. A State with viable transport routes that open all the hinterlands, to effectively link all local governments in one fell swoop and open up all the hinterlands for economic activities to blossom. Roads will hold together the Endless orchards that will spring up in all Local Governments.There shall be no more unreached areas again in Abia State. Never! A world-class State Capital with paved streets and green environments. Umuahia growing into a well-secured capital city with streetlights that turn night into day and housing a labyrinth of gated communities where our citizens live side by side in love under God,” he declared passionately.

Continuing, Ogah noted that to attain the re-invention of an Abia State that meets and surpasses the dream of its founding fathers in all ramifications, it was imperative to imbibe the following critical qualities: Courage, Character,
Commitment, Capacity and Faith in God. Courage to brave odds and embrace right attitudes towards good governance. Character that portrays a person as uncompromising and cannot be bought to abandon cherished values and principles. Commitment to collective goals that engender good governance. Capacity to deliver when entrusted with public office. Faith in God as the only author and finisher of our fate. He added that as a person, he has demonstrated these traits.

He urged Abians to give him their mandate and in partnership, they will realize the Abia of their dream.

The Minister revealed that in reality, Abians know they need redemption by a person whose records of constant quest for growth, hard work, excellence, result-orientation and entrepreneurial successes depict Courage, Character, Commitment, Capacity and Faith in God. A person who understands the nexus between theories and practical means of human capital development, saying, “that’s exactly who I am”, he enthused.

He solicited the people’s support to join him to restore the glory of Abia in its full strength; a State of accessible roads with drainages, and zero tolerance for flood and debris. A State where its markets shall be the largest on the West coast and its products shall dominate the Nigerian markets as it was before.

He promised to be that Governor that history will remember for the restoration of the glory of Abia. He disclosed that the vision of a glorious Abia State is alive in his heart. Saying, “I can see it, faith is the substance of things hoped for, the evidence of things not seen”.