2023 Zoning: Blame PDP’s desperation if Presidency does not go South 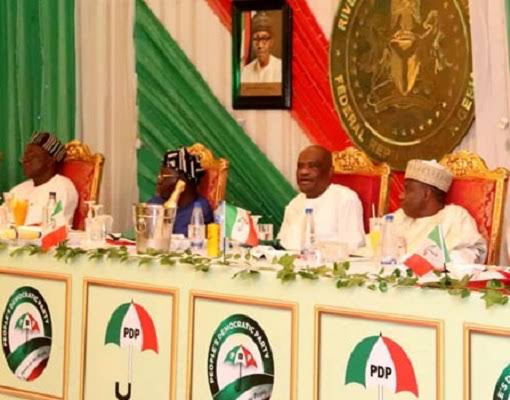 FOUNDING member of ruling All Progressives Congress (APC), Mr. Osita Okechukwu, has said Nigerians should hold the opposition Peoples Democratic Party (PDP) responsible if the 2023 Presidency is not zoned to the South.

He said APC has been watching with studied interest the desperation of PDP to prey on President Muhammadu Buhari’s 12 million Vote Bank, stressing that as a political party APC has to fine-tune its strategies for the forthcoming general elections.

Okechukwu, who is also the Director General (DG) of Voice of Nigeria (VON), was reacting to the condemnation of APC’s indecision to zone the 2023 Presidency to the South by from Middle Belt Forum, PANDEF, Afenifere and Ohanaeze.

The leaders of the regional socio-cultural groupings, MBF, PANDEF, Afenifere and Ohanaeze, had during the recent Greater Nigeria Conference (GNC) held in Abuja accused APC of playing hanky-panky with the zoning of the Presidency to the South.

But, speaking during an interaction with journalists in Abuja, Okechukwu stated: “Although one is not holding the brief of our distinguished national Chairman, Senator Abdullahi Adamu, one’s little understanding is that the leadership of our great party, is watching closely the desperation and antics of our elder sister political party, the PDP.

“They want to capture power by all means, indeed using Machiavellian tactics. We all know that PDP is famished, thirsty and desperate to win the Presidency in 2023. They loathe the loss of their slogan ‘Share the Money’ through their absence from power at the center for seven going to eight years.”

Explaining further why PDP should be blamed, Okechukwu said it was unconscionable and despicable that the opposition party should breach the zoning convention, which helped in no small measure to unite and harmonise the country.

“PDP,” he said, “is aware that President Buhari will not be on the ballot in 2023, therefore, for them there is a void to fill. They must have reasoned that the Buhari’s Vote Bank would be up for grabs if they go north.

“Methinks PDP’s calculation is a desperate one, and selfish to the extent that they breached their own constitution and their age-long die-hard supporters in the South, especially the Southeast.”

He added: “As a corollary, APC seems to have adopted the cat and mouse game, because if the PDP adopts the terra firma or doctrine of realpolitik, which places electoral victory above their constitution, the moral high ground and ethics of their members and supporters in the South; APC wants to do the pragmatic thing. That is going back to the drawing board.”

National Executive Committee (NEC); so as not lure APC from shifting away from implementing the party’s earlier zoning format of swapping offices between north and south, as declared by Governor Nasir el-Rufai before the March 26 National Convention.

meeting for the collective interest of our dear country. They should not disappoint their southern supporters. Equity, natural justice and good conscience are on the table.”

He said: “To be frank, my take on the matter is that the swap option is still open, because some of us from the South are still arguing that we have dormant votes, especially Igbo votes which will augment APC members’ votes from the north. Ones position is that our northerner members cannot abandon us. They voted Chief MKO Abiola, Chief Obasanjo and Dr Jonathan.”

“However, if at the end of the day the PDP National Execute Council fails to zone south; we should blame PDP’s desperation, because we have been advocating a repeat of the Chiefs Obasanjo/Falae, Yaradua/Buhari and Buhari/Atiku models of 1999, 2007 and 2019 respectively.”