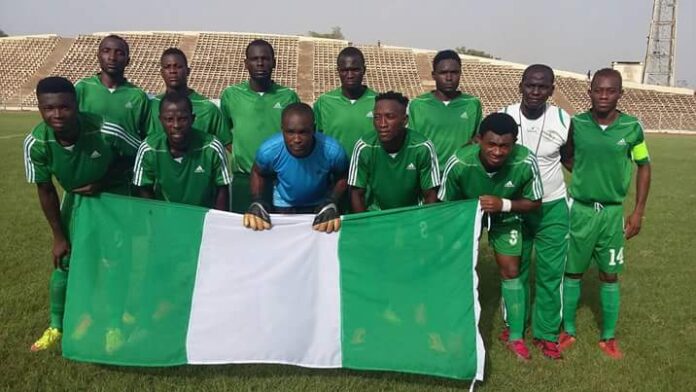 National Deaf Eagles’ coach, Kamuldeen Banjo has joined football stakeholders that are calling on the NFF to pay more attention to grassroots football development, positing that its the only way the country’s football can develop.

He told Nigerian Pilot Sports that there are raw talents in the country at the grassroots and if these players are discovered and nurtured , the craze of rushing abroad to invite players to the national team will be a thing of the past.

“I want to tell you that this country boasts of many talented players at the grassroots and the football house must go back to the basics and take the issue of grassroots football development serious. If this is done, the idea of favouritism in our football will no longer be there.

” You’re aware that FIFA normally gives grants to NFF for grassroots football development and I want the football house to release the money to the various state Football Associations to enable them develop football in their states.

” There is also need to give financial support or at least equipment to the various football academies and coaches in the country as a way of encouraging them to develop football.

Banjo who is the founder of Banjo Football Academy Lagos where players combine football with education explained that for the past ten years, he has been managing to keep the academy going but if given adequate support, he will produce many players for the national teams.

“My academy has been there for about 10 years now and thank God one of my players has just moved on to another team and if he can be invited to the Golden Eaglets, I believe he will do well.

” Apart from him, I have other quality players who are combining football with education which is what we do here. About ten of them are in the University, still playing football and I believe that if such players are given opportunity, they will get to the peak of their career”, concluded Banjo who said his major aim is to develop talents, market them and ensure some of them play abroad in the next three years.