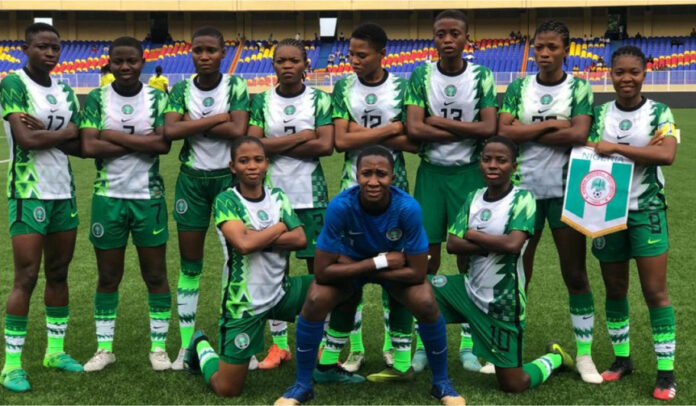 Nigeria’s U17 girls, Flamingos must overcome their Ethiopian counterparts to earn a ticket to this year’s FIFA U17 Women’s World Cup finals taking place in India in October.

The Coach Bankole Olowookere tutored side defeated their hosts, Egypt’s U17 girls 2-0 in Cairo on Saturday night, with top scorer Opeyemi Ajakaiye opening the account in the 5th minute before Aminat Omowunmi Bello added a second nine minutes later at the Petrosports Stadium, for a 6-0 aggregate win for Nigeria.

Ethiopia defeated South Africa’s U17 girls 3-0 away in Johannesburg in the first leg of their third round clash, only to lose 0-1 to the South Africans in Addis Ababa on Saturday. The Ethiopians had edged Uganda on the away goal rule in the second round, with aggregate scoreline stalemated at 3-3.

Not only are the Flamingos, who have played in every edition of the FIFA U17 Women’s World Cup bar one, undefeated in this qualifying series, they are yet to concede a goal. They hammered Democratic Republic of Congo 3-0 in Kinshasa and 5-0 in Benin City, for 8-0 aggregate scoreline, before sending the Egyptians packing 6-0.

The nifty Ajakaiye is top scorer with five goals, having scored in each of Nigeria’s four matches (with a brace against the Congolese in Benin City).

The first leg of the Nigeria/Ethiopia final round fixture will hold on 21st May, with the second leg taking place two weeks later.