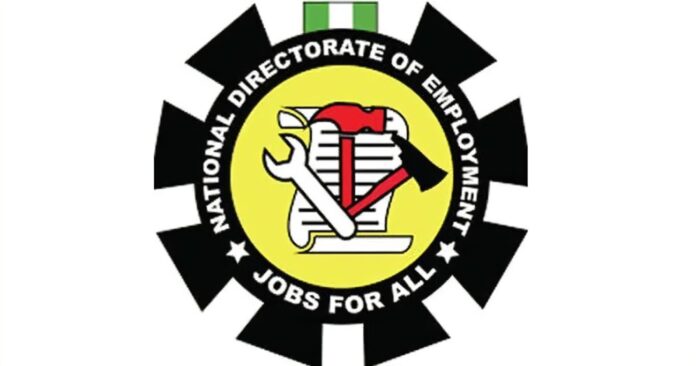 Director General of the National Directorate of Employment, NDE Mallam Abubakar Nuhu Fikpo has said the Federal Government’s commitment to properly harness the huge potentials of unemployed youths, women, and people with special needs for national development, while emphasizing that the key to solving unemployment problem in the country, is concerted efforts of all the stakeholders.

The NDE boss said this in Oshogbo Osun State Capital while speaking through the NDE State Coordinator, Mr. Julius Fakunle at the disbursement ceremony of Micro Enterprise Enhancement Loan Scheme ( MEELS), Mature People Programme MPP) and Start Your Own Business (SYOB) loan schemes to the beneficiaries in Osun State.

According to him, 228 participants under the MEELS scheme are benefitting from N20, 000 each, while seven selected graduates of tertiary institutions, who had earlier been trained by the NDE are assisted with a loan of N500, 000 each to support their business.

He also disclosed that other categories of unemployed persons are benefitting under the Mature People Programme (MPP) to the tune of N4.5 million.

Mallam Fikpo noted with satisfaction that thousands of unemployed persons have used the NDE platform to become self-employed and self-reliant, saying many of them have distinguished themselves as successful master craft men/women and successful business promoters, using their God given resourcefulness to contribute to nation’s economy.

The NDE DG said the “Directorate can still do better, if the Federal Government could increase funding of NDE programmes and activities, while noting that, unemployed families in all nooks and crannies of the country are becoming increasingly aware of NDE’S positive impact on jobs creation.”

He assured Nigerians that the NDE would continue to do its best, given the positive testimonials and encomiums being poured on the Directorate from various beneficiaries across the Nation.

He admonished all the beneficiaries to make good use of the loan facilities provided for them.