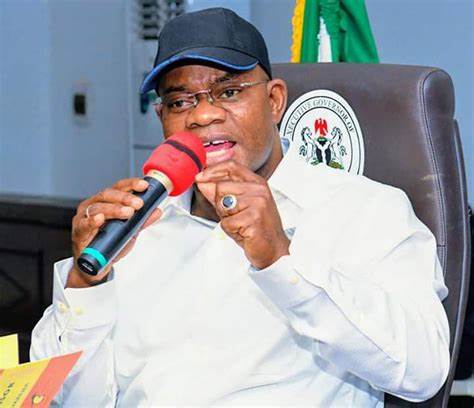 Governor Yahaya Bello of Kogi State has called on the Organised Labour in the state to see the government as partners rather than antagonists.

Gov. Bello made the call during the 2022 International Labour Day celebration held at the Mohammadu Buhari Civic Centre in Lokoja.

He urged the labour force to see the government as partners in the effort to ensure socio-economic and political advancement of the country in all ramifications of development with commensurate good governance.

The governor who promised regular payment of salaries and pensions dispelled rumours making the rounds that the state government was planning to retrench or downsize its workforce.

He expressed sympathy with Nigerians and workers saying that since 2019, cost of living had been on the rise and things getting tougher particularly for workers in the public sector.

Bello said that situation was aggravated by the rising inflation in the country but assured that there would be light at the end of the tunnel with succor in the coming days.

He commended Kogi State workers and the Organised Labour for their sacrifices, maturity, patience, and assured that he would use any opportunity available to apply palliatives that would cushion the pains of the workers in the State.

Bello also promised a resuscitation of the N500, 000 car refurbishing revolving loans for civil servants, pointing out that qualified workers would benefit from the scheme as they used to.

While promising to continue to serve the people with commitment and sincerity of purpose, the governor assured of free and qualitative education, health, good roads, security of lives and properties under his administration.

The Governor acknowledged and attributed the payment of percentage salaries to workers at the Local Government level to huge wage bills from heavy level of staffing and low inflow of allocations.

He assured that local government workers would soon be paid 100 per cent as their state counterparts with expected improvement in the allocations.

Nigerian Pilot reports that this year’s International Labour Day is themed, “Labour, Politics and Quest for Good Governance and Development in Nigeria”.