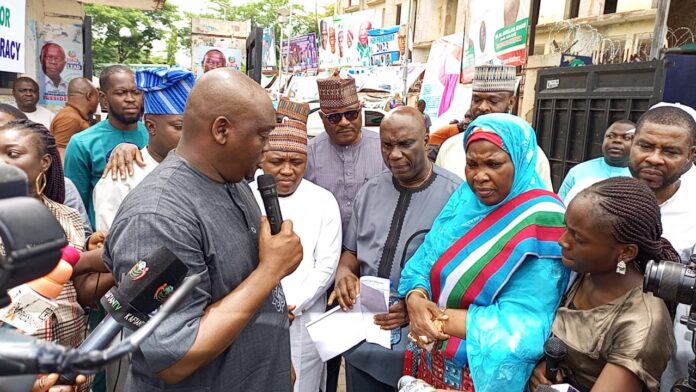 …says rotation is of power key to Nigeria’s unity

A Civil Society Organisation called Concerned Nigeria Citizens on Wednesday in Abuja marched on the ruling All Progressives Congress (APC) and the opposition Peoples Democratic Party (PDP) shutting down activities at the secretariats of the two dominating political parties declaring that they must zone presidency to the Southern part of Nigeria.

This group in a position paper read out in an during the protest march and submitted to officials of the political parties with subject ‘An Appeal/Demand for the Zoning of Your Part’s Presidential Ticket to the Southern Nigeria’ jointly signed by the leaders while making their stand known at a press conference held in Abuja, and they include Convener, Femi Osabinu; Secretary General, Alhaji Sidi Ali; North Central, Okpanachi Jacob; South West, Femi Akindele Lawson; North West, Alhaji Ibrahim Mohammed; South East, Dr Uzoh Chukwuemeka; and South South, Barr Blessing Hossanah.

During the protests, members of the group were seen carrying banners and placards carrying various inscriptions to press their demand such as, ‘2023: Powe Must Shift to the South, PDP, APC please note our concern’, ‘Presidency to the south for one Nigeria’, Save democracy, zone presidency to southern Nigeria’, ‘We support power shift’, ‘Promote unity shift power to the South’s, ‘Rotation is key to Nigeria’s unity’, amongst others.

The position paper addressed to the National Chairmen of APC and PDP, reads, “We bring you sincere greetings, from the members and leaders of our organization and by extension, the good people of the Six geopolitical states of our great country, Nigeria

“Sir, this letter becomes imperative, in the wake of the National questions, that have begun to emerge, on the zoning of the Presidential ticket of your party, ahead of the forthcoming 2023 Presidential election, in our country and presentation of zoning committee report expected to be laid today.

“We are seriously concerned as patriotic Nigerians, that just few days to the Presidential primaries of your party, the party is yet to intimate Nigerians, about its decision, in respect of where it is zoning the Presidential ticket to. Recall, that the rotation of power in Nigeria, goes beyond mere aspiration of political parties, but also a tool, towards ensuring national unity and stability, and in this regard, candidates from the southern Nigeria, must be allowed to occupy the position of President in the country come 2023.

“We also wish to remind you, that the established convention is that power must rotate between the North and the South. Hence a President of northern extraction follows that of Southern extraction and vice versa. Any consideration outside of this is foul and may destabilize the polity.

“It is only fair, that after President Muhammadu Buhari, power must come to the south. Any argument against this is inimical to the unity and stability of our nation.

“It is equitable that once the above stands and power is conceded to the south, we will not only be respecting this established convention of power rotation, but we will also be contributing to the dire need, to restore stability and national cohesion, back into our polity.

“It is the turn of the Southern part of the country to produce the next President, and we believe that your party, should have no difficulty in coming out with a categorical declaration, on this very important issue, in the next few days. This must be done without delay. The principle of Federal Character is enshrined in the 1999 Constitution, as amended. Remember, there won’t be APC if there is no country called Nigeria. Let us put Nigeria first in our resolutions.

“While wishing you the best as we move towards the general election, we wish to restate that nothing other than the rotation of power to the South, shall be acceptable to us, and our people.”

Meanwhile, the Deputy National Secretary of the APC received the protesters in company of the Deputy National Women Leader, National Youth leaders on behalf of the National Working Committee, stated that, we thank you for your visit to the APC National Secretariat and your letter dated 4th May, 2023 with the title” An appeal/demand for the zoning of your party’s presidential Ticket to the Southern Nigeria, I want to assure you that we would study the letter very carefully and revert back to you.

“But just to say as our National Chairman has said on national television,.that our party has yet to take any decision regarding the subject matter of your letter. And that is still the position that I reiterate even now. I would crave your patience and understanding that as soon as that decision is made you would be the first to know.”

The group while expressing it’s satisfaction for the audience granted it by the APC, however frowned at the refusal of officials of the opposition PDP to receive the protesters or even their protest letter and called on Nigerians to take note and reject the PDP in 2023.