HomeBreaking News2023: Why Nigeria’s next president should come from south – Governor
Breaking News

2023: Why Nigeria’s next president should come from south – Governor 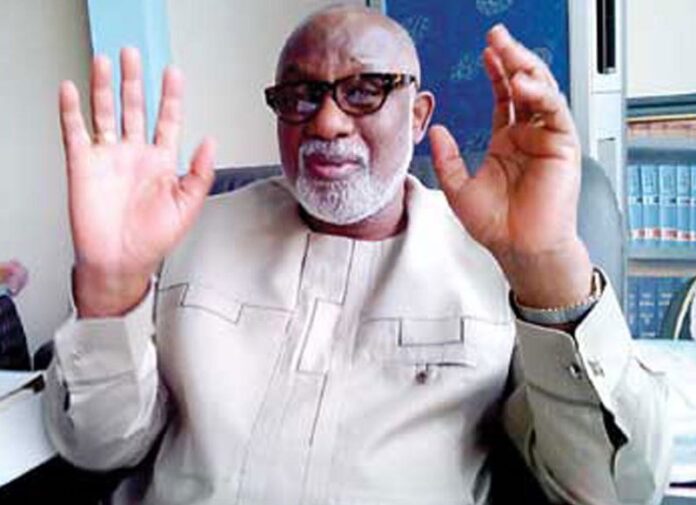 Governor Oluwarotimi Akeredolu of Ondo State, has called on the leadership of the All Progressive Congress (APC) to zone the presidential position to the southern part of the country.

Mr Akeredolu made the call in a statement, tagged “Our Party, APC, Must Tread The Path Of Equity”, which was made available to reporters on Tuesday in Akure.

The governor said that the party could not afford any internal bickering which could cause distrust and militate against cohesion, harmony and the zeal to achieve set objectives.

Mr Akeredolu, who said that the current democratic dispensation is anchored on the unwritten convention driven by a principle of equity, said the APC must do nothing which is capable of tilting the delicate balance against the established arrangement which guarantees peace and promotes trust.

According to him, “Our party just elected officers on the established principle of giving every part of the country an important stake in the political calculus.”

He explained that the focus has now shifted to the process which would culminate in the participation of the party in the general elections in 2023.

“All lovers of peace and freedom must do everything to eschew tendencies which may predispose them to taking decisions which promote distrust and lead to a crisis, the end of which nobody may be able to predict.

“The leadership of the party ensured that the principle of rotational representation guided its decision at the just-concluded convention,” he said.

Mr Akeredolu, who said party chairmanship position had gone to the North and all other offices have been filled, said it is the time the leaders of the party must make a categorical statement, devoid of equivocation, on the pattern of succession.

He said the party executive committee had fixed a fee for the purchase of the nomination form for the office.

“It is expected, fervently, that it would proceed to complete the process by limiting the propensities for disagreement to a region for possible micro-management.

“It is very expedient that we avoid self-inflicted crises before the general elections. It is the turn of the Southern part of the country to produce the next President.

“The party leadership should have no difficulty in making pronouncement on this very important issue, just as it has fixed various fees for the purchase of forms.

“This must be done without delay. The principle of Federal Character is enshrined in the 1999 Constitution, as amended. It will be disingenuous for anyone to argue against rotation at this period.

“We must not keep our party men and women guessing on the position of the leadership of the party. This is the time to weigh in and take control of the process.

“No statement must suggest, even remotely, that the party harbours certain sentiments which may predispose it to consider throwing the contest open.

“This is certainly not the time for equivocation. Equity Dictates That We Take A Stand,” Mr Akeredolu said. NAN