Ortom, Akume and the performance challenge 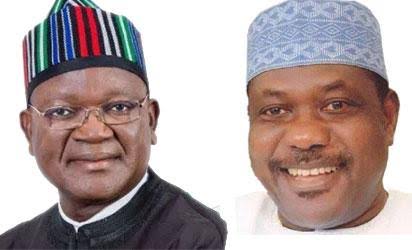 THE political intransigence between Governor Samuel Ortom of Benue
State and his erstwhile associate, Senator George Akume, Minister of
Special Duties and Inter-governmental Affairs, has again played out
with the governor tasking the minister to list his achievements since
1999 as Governor, Senator and Minister.

Governor Ortom tasked Akume to specifically enumerate his projects as
a two-term Governor; his achievements as a three-time Senator
representing Benue North West Senatorial District, as well as the
projects he has attracted to the state now that he is a minister for
three years.

“This is someone who has benefited tremendously from the goodwill of
Benue people who voted him for two terms as Governor, three terms as
Senator, and now he is a minister representing the state. Sadly, all
that our people have got in return from him are insults and baseless
accusations”, the Governor stated.

Governor Ortom, according to a statement by his Special Adviser on
Media and Publicity, Terver Akase, threw the challenge in reaction to
Senator Akume’s recent utterances against him at a function in Abuja.

The Governor, according to Akase, expressed disappointment in the
minister for failing the people in all the mandates that he has been
given to serve.

He went further by asking that his achievements and that of the
minister be placed side by side for the world to know who has
excelled.

“I challenge Akume to place his projects side with mine and let’s see
who has excelled as governor.

“Let him show Benue people just one bill that he sponsored or even a
single motion that he moved during his 12 years in the Senate.

“All that our people have received as reward for their support of
Akume in 23 years are accusations and blackmail. He has sold his
conscience to enemies of the state for a pot of porridge”, the
Governor stressed.

The Governor in the statement by his Special Adviser on Media recalled
Akume’s utterances in 2019 after the state came under herdsmen attacks
and hundreds were killed wherein he accused Benue people of killing
themselves, noting that the people responded accordingly by voting him
out of the Senate to demonstrate their anger towards him.

Governor Ortom said the only way to put an end to Akume’s persistent
mischief against the state is for the minister to display his
achievements as governor, senator and minister.

As the sitting governor, Ortom occupy the vantage position of
evaluating Akume’s achievements as governor between 1999 and 2007, and
knowing that what he has so far achieved in the last seven years far
outweighs Akume’s.

The rift between the two political gladiators dates back to 2017 when
Ortom signed the Prohibition of Open Grazing and Ranches Establishment
bill into law. The development was said not to had gone down well with
Senator Akume who was said to had considered it an affront on the
northern oligarchy.

According to a highly placed politician in the state, the fundamental
issue is that Senator Akume wanted to ingratiate himself with
President Muhammadu Buhari, the presidency in Abuja while Governor
Ortom chose to stand with Benue people.
For instance, Akume according to the source, told Ortom on May 22,
2017, the day of the signing of the anti open grazing bill not to
append his signature because there would be backlash from Abuja
because the Fulanis, according to him are powerful and as such could
come after him and do many things to him.

But Ortom, according to the source, ignored Akume’s advice and went
ahead to sign the bill into law, as according to him, the people of
Benue would stone him if he failed to do so.
Since then, the source said Akume had bent backwards and told people
in Abuja that Ortom was stubborn and had ignored his advise against
signing the bill into law and alluded that that was why there was
crisis in the state.

Another factor that led to the parting of ways between Ortom and Akume
was said to be their disagreement over the selection and appointment
of the Tor Tiv, the paramount ruler of Tiv nation.
While Senator Akume preferred a retired high court judge, Governor
Ortom was said to had insisted on a traditional ruler who would swear
by the Bible and not Swem, a Tiv deity. At the end of the day, Ortom
had his way with Professor James Ayatse whom he was said to had
supported emerging as the Tor Tiv.
“So, Senator Akume has not forgiven Ortom over the emergence of HRM,
Professor James Ayatse as the current Tor Tiv. He felt uncomfortable
that Governor Ortom could beat him to the game,” the source said.
Sen. Akume was also said not to have been comfortable with the mending
of fences between Ortom and Senator Gabriel Suswam, Ortom’s
predecessor whom he said must go to jail over alleged financial
malfeasance.

The political disharmony between the duo later dovetailed to the
defection of the latter from the All Progressives Congress, APC to the
Peoples Democratic Party, PDP and saw the former making
uncomplimentary utterances that the latter would lose his second term
bid, not just because he defected from the APC but for the simple fact
that he attributed his victory in 2015 to the Holy Spirit.

The Minister of Special Duties and Intergovernmental Affairs was said
not to be happy with Ortom because he felt he and not the Holy Spirit
was the one that facilitated the governor’s candidature and subsequent
victory in 2015.

But Gov. Ortom not being the type that keeps quiet about God and his
transcendental influence in the affairs of men, told all that cared to
listen that it was God that made him governor in 2015. Again, prior to
the 2019 general election, the governor announced that God had
endorsed his candidature for a second term of office and that God had
assured him he was going to win.

He did not stop there, but predicted that Akume was going to lose his
fourth term senatorial bid because he played God.

Hear what Ortom told reporters after Akume’s fall. “Have I told you
anything before and it did not happen? I told you that I would send
Akume into retirement. You can now see it happening.

“People who play God should know that their end will be disastrous. I
have read the Bible from Genesis to Revelation and I know that anyone
that compares himself to God can never survive.
“God is real. Psalm 24 said the earth and its fullness thereof belong to God.
“So, when people begin to play God, they are taking the position of
God. Their end will be disastrous because you cannot share the glory
of God.”
Akume have also come under heavy condemnation by exonerating armed
Fulani herdsmen from the killings in the state and attributing it to
Benue people.
With the elections drawing closer, more allusions would still be made
about the performance conversation, either by the duo or their
supporters to win popularity.
END

QUOTE The Minister of Special Duties and Intergovernmental Affairs was
said not to be happy with Ortom because he felt he and not the Holy
Spirit was the one that facilitated the governor’s candidature and
subsequent victory in 2015.