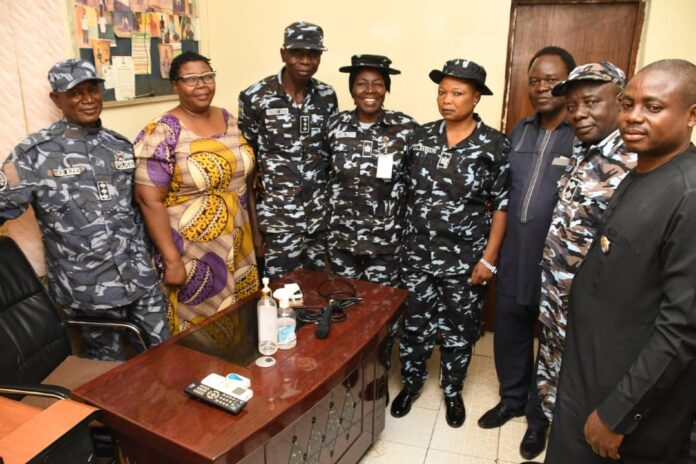 Federal Capital Territory FCT, security personnel especially Police officers have been charged to always be there for each other, in the pursuit of their core mandate of policing the city.

This charge was given by Superintendent of Police SP, Rahamatu Umar, a retiring Divisional Police Officer DPO, in charge of the FCT Secretariat and environs.

SP Umar, who was retiring this week, after 35 years in service, in a chat with newsmen noted that Police work is a team work, as no one can do it alone, urging senior officers to always be up and doing by being hard working and patient while putting subordinate personnel through the job.

According to her, police work is a team work, so you can’t do it alone. You have to go with others , so I thank my subordinates and junior ranks – we were always there for each other.

Sharing her working relationship between her Division and the FCT Administration while in service, said : “We were all good to each other – from the FCT Security Department to other stakeholders. We are attachees to the complex, but we are the overall number one security.

” When anything happens – whether in the night or day, my phones are open 24/7, they call my lines; or they have any security report, they will call me direct, saying beef up security, this is what is going to happen. And I will call my personnel, let us act and the situation brought under control. It is not my doing, but it is the grace of God.

“My advice to my successor is that she should be patient and carry everybody along, put the personnel through the job, and she herself should be up and doing. Let her not sit down in the office, just waiting for her subordinates to do it for her, so she be up and doing by visiting them, talking to them and organising lectures.

“Also, she should not hesitate to call their attention and point fingers to whoever that is wrong. Also, she should place anybody that is misbehaves where he belongs to – that’s the job.”

SP Umar, who joined the Police on the first May, 1987, and retired on Sunday, First May, 2022, said : “I thank God for seeing this day alive- physically alright and I’m bouncing out physically to my family. I thank the FCT Minister for being there for me, because if there is anything concerning the personnel, I would run to him, and he will always answer me”.

She retired as a Division Police Officer posted to FCTA Secretariat complex, which houses office the FCT Minister and top officials of the FCTA as well as the Federal Ministry of Agriculture and Ecobank.

Other areas of coverage within the Division include CBN Quarters, FCDA building, Nicon Luxury, NTA broadcasting and admin blocks and Cantonment barracks within the Area 11, Garki District of Abuja.

On her part, the new DPO posted to the FCTA, SP, Gimbya Audu, said she taking over to continue from her predecessor stopped, even as she going to work with the advice from SP Umar.

According to her, “I have to work very hard with my personnel as a team, because without their cooperation, then the work will not go well.

“My general charge to my subordinates, is that let us work together, as I need them to be always cooperate like one family, so as to deliver on our mandate here”.