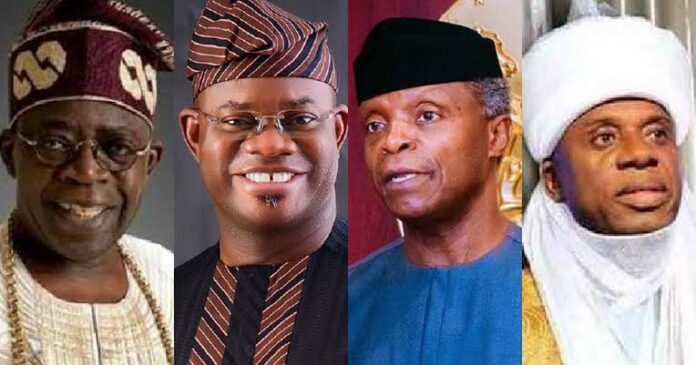 *22 aspirants, so far, jostle for presidential seat on platform of All Progressives Congress

*As party extends sale of expression of interest, nomination forms to May 10

As the race for the exalted position of the President of the Federal Republic of Nigeria continues to gather momentum, no fewer than 20 persons have so far indicated interest in occupying the seat come 2023 on the platform of the All Progressives Congress, APC.

Nigerian Pilot gathered that the party leadership is also expecting more people to join the race which may have forced them to extend the sale of the expression of interest and nomination forms respectively to May 10, 2022.

A reliable source close to the party said “As at the last count, about 20 presidential aspirants (mostly from the South) have so far declared their intentions to run for the office of the president on the platform of the party.”

Though the number of aspirants for other elective offices cannot be categorically ascertained, reports indicated that more than 5000 aspirants have so far declared to contest the 2023 elections on the platform of APC while now fewer than 70 people have declared for governorship seats.

Findings by Nigerian Pilot correspondent indicated that no fewer than seven presidential aspirants have procured the party’s expression of interest and nomination forms after paying the prescribed sum of N100 million each.

Further checks also revealed that no fewer than 70 governorship aspirants have paid the sum of N50m to pick the party’s nomination forms.

The ruling party began the sale of nomination forms to presidential, governorship and federal parliamentary aspirants on Tuesday, April 26. The exercise which was scheduled to end on Friday May 6 has been extended to Tuesday, May 10 in anticipation of more aspirants.

Though he is yet to come to the party’s designated venue for sale of forms, an APC source hinted to our correspondent that Jigawa State governor, Abubakar Badaru has also paid the sum of N100 million in a designated bank to procure the party’s nomination form.

Report said one Mrs. Uju Kennedy, who presently is the only woman presidential aspirant has also picked her nomination forms after depositing N30 million.

Those who have declared presidential ambition, but are yet to pick the forms include Vice President Yemi Osinbajo, Minister of Transportation Rotimi Ameachi, Minister of Labour and Productivity, Dr Chris Ngige, Ibrahim Daudu and Jack Rich Tein.

Others are Ekiti State Governor Kayode Fayemi, Comrade Adams Oshiomole, former Akwa Ibom State governor, Godswill Akpabio, all of whom made their declaration on Wednesday.

Eight governors seeking a second term have secured their nomination forms by proxies.

Some state governors who will be term-limited in 2023 and cannot seek re-election have their deputies eyeing taking over from them. They include Niger State Deputy Governor, Mohammad Ahmed Ketso who is itching to succeed his boss, Abubakar Sani.

The National Organising Secretary, Sulaiman Muhammad Argungu, who confirmed the figures, expressed satisfaction with the conduct of the exercise. He assured all aspirants that Senator Abdullahi Adami-led National Working Committee (NWC) has resolved to provide a level playing ground.

Meanwhile, the All Progressives Congress (APC) National Working Committee (NWC) on Wednesday extended the Party’s Sale of Expression of Interest and Nomination Forms for the 2023 General Elections to Tuesday, May 10, 2022.

In a revised timetable issued by the APC National Organising Secretary, Sulaiman Muhammad Argungu said that the last day for submission of completed forms and accompanying documents is now set for Wednesday, 11th May, 2022.