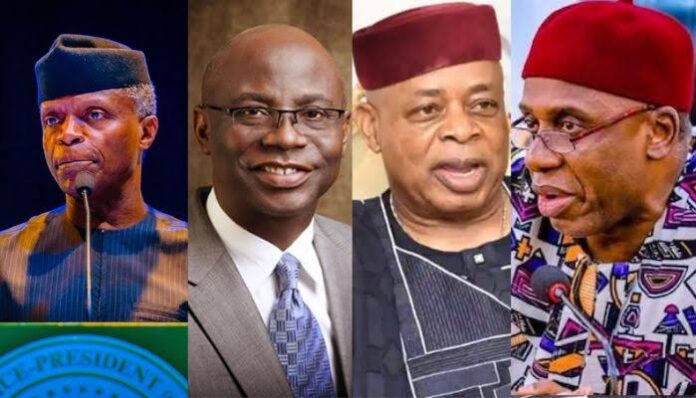 International Conference Centre, ICC, Abuja was Thursday a beehive of activities as more presidential aspirants under the platform of All Progressives Congress, APC, picked their nomination and expression of interest forms.

At least, no fewer than five presidential aspirants picked the forms after paying the prescribed fee of N100m naira swelling the number of aspirants who have picked the APC presidential nomination forms to eleven.

Most of the presidential aspirants picked the forms through proxies with the exception of Bakare and Nnamani.

Vice president Yemi Osinbajo’s form was procured for him by a coalition of his support groups led by former Kano State governor, Senator Kabiru Gaya.

Addressing journalists at the venue, Senator Gaya insisted that it is the turn of the South to produce the next president of Nigeria while stressing that Prof Osinbajo remains the best man for the job among other aspirants.

“I’ve been in politics for many years and I understand at a certain level how politics should be played. I believe it is a game of give and take. We have served for the president in this country for eight years under the leadership of president Muhammadu Buhari so therefore the presidency should go to the South and that is why we said the best person to handle this matter is somebody who has been in the system, if he’s sworn-in today at the Eagles square, by tomorrow morning he can pick up because he’s already in the system. I was a governor. I know what it takes when you are sworn-in. It takes time for you to learn and move forward. But when you are in the system, you don’t have that problem, it’s going to improve because they have now draw a plan and which you could have peace, stability and better economy and he’s going to improve on that new plan we have to develop the economy to a better and for Nigerians to be better,” he said.

On the increasing number of aspirants in APC he said, “Democracy is a game of number, every aspirant that is contesting is qualified, nobody is not qualified to contest election but we are saying that we should look along the line and see who’s the best material and I’m sure if we put them together, all of them together, they will pick Osinbajo as candidate.