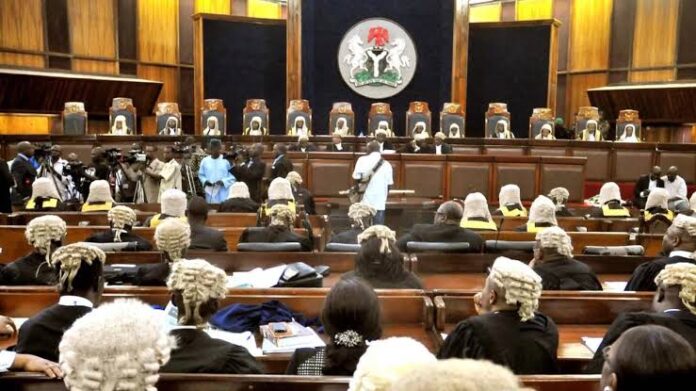 The Supreme Court  on Friday in a landmark judgment resolved the ownership dispute of 17 oil rich wells in favour of Rivers State.

The oil Wells located in the territories of Rivers and Imo States have been a subject of litigation at the apex court which served as a court of first instance with seven Justices in the panel.

According to Justice  Agim, reliefs 1, 3 4 5 and 6 sought by Rivers State Government were granted by the Court.

The Court however refused to grant reliefs 2, 7 and 10.

Among the reliefs granted by the apex Court in favour of Rivers are that the boundary between Rivers and Imo as delineated in Nigeria administrative map 10th edition, 11th, 12th edition and other maps bearing similar delineation are inaccurate, incorrect, and do not represent the legitimate and lawful boundaries between Rivers and Imo state.

The Supreme Court agreed with Rivers that the correct instruments, map and documents to be relied upon in the determining the boundary between Rivers and Imo states are those used by Rivers in delineating the boundary line between the two states including Decree No. 14  of 1967, Decree No. 12 of 1976, the White papers/conclusion of the Federal Military government on the Irikefe and the Nasir Boundary Commission/Boundary Adjustment Commission, the Eastern Nigeria map, the Provincial map of Owerri province, Warri Province, Onitsha Province, Rivers Province, the Ahoada District map and Aboh Division map.

The Apex Court also declared that based on the correct instruments, maps and documents for determining the boundary between Rivers and Imo states, including Decree no. 14 of 1967, Decree No. 12 of 1976, the White papers/conclusion of the Federal Military Government on the Irikefe and the Nasir boundary Commission/boundary Adjustment Commission, the Eastern Nigeria map, the Provincial map of Owerri Province, Warri Province, Onitsha Province, Rivers Province, the Ahoada District map and Aboh Division map, the Rivers State communities wrongly attributed to Imo State among other communities are communities within the territorial boundaries of Rivers State and therefore communities in respect of which Rivers State is entitled to exercise governmental and administrative powers including entitlement to benefits derivable from mineral or other resources within the communities.

The court also made declaration that all the oil wells within Akri and Mbede communities usually identified with the names Akri and Mbede including the oil wells identified on Rivers map showing the location of oil wells wrongly attributed to Imo State including Akri 012, Akri 009, Akri 010, Akri 004, Akri West 002, Akri 001, Akri West 001, Akri 003, Akri 002, and Akri South 001, Mbede 017, Mbede 010, Mbede 019, Mbede 018, Mbede 002, Mbede 009, and Mbede 005 are all oil wells within the territory of Rivers State and form part of Rivers State and that it is only Rivers State that is entitled to receive the full allocation of the distributable revenue derived from the oil wells on the basis of the 13 percent derivation principle as provided for under Section 162 of the 1999  Constitution as amended, among others.

Justice Ogunwumiju however refused to grant the N500M cost requested by Rivers State.

The Supreme Court also refused to order the AGF to calculate and refund to Rivers State all revenue that have been wrongly denied the state and wrongly paid to Imo state on account of the extent of the distributable revenue derived from the Akri and Mbede oil wells.

AGF and Imo state who are the 1st and 2nd defendents respectively in the suit had On February 7 when they adopted their final processes prayed the court to dismiss the suit and order Rivers to file it at the Federal High Court because it is a revenue matter.

Their grounds are that before the suit can be amicably resolved, witnesses, especially residents of the disputed areas needed to be called to give oral evidence on which side they belonged between Imo and Rivers.

The two defendants further demanded that the intervention of the National Boundary Commission would also be required to give evidence at the Federal High Court before an appreciable conclusion can be drawn.

The requests were however turned down by the court.