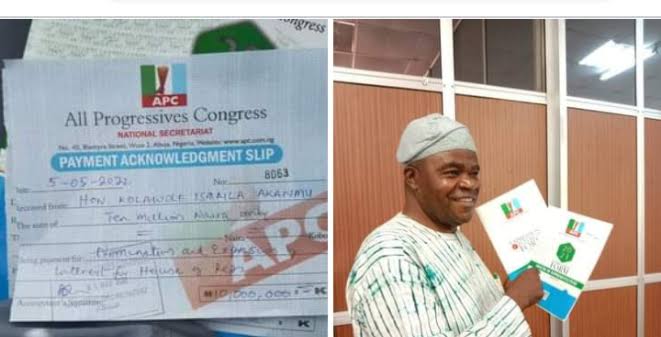 …Calls for total support and unity in Osun APC

Former member, House of Representatives, who represented Boluwaduro/Ifedayo/Ila Federal Constituency, Hon Ismaila Kolawole has called on members of the All Progressives Congress (APC) to join hands together and shun campaign of calumny before, during and after the forthcoming governorship election in Osun state.

Hon Kolawole made this call shortly after he has obtained his intention form to contest for the House of Representatives seat for the Boluwaduro/Ifedayo/Ila Federal Constituency.

Hon Kolawole, who was also a member of Osun State House of Assembly representing Ila state Constituency and a onetime Private Secretary to the former National Chairman of the All Progressives Congress, (APC) Chief Bisi Akande said it is imperative for all the APC members across the state to work together towards the total victory of the state governor, Mr Gboyega Oyetola come July 16.

He said, Mr Governor has done wonderfully in transforming the entire state in all ramifications with his people oriented programmes which has contributed to the betterment of all and sundry.

“Let us work together as a team and ensure complete victory of our party during the gubernatorial election which is drawing nearer.

“I want to commend efforts of the Chairman of our party in the state, Prince Gboyega Famodun in collaboration with other APC Chieftains in ensuring that our party is in the forefront peacefully and in all ramifications ” The Ila born politician said.

Hon Kolawole, obtained his intention form to contest for the House of Representatives under the banner of the APC having paid ten million naira.

According to him, “my representation would bring more dividends of democracy to my constituents.

“I pledge to attract more development to the entire constituency and promise to focus on women and youth empowerments.

“When you empower women, you empower the nation while investment in youths will translate to nation building,” Hon Kolawole added.

Hon Kolawole however appreciated all the traditional rulers, market men and women, students, religious leaders, artisans, party leaders and entire people of his constituency for their unflinching love and support to him all the time, saying “I will not fail you all”.