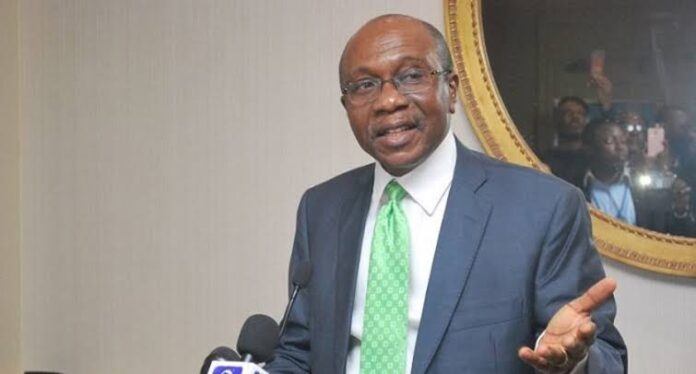 African Action Alliance, AAC has distanced itself from a statement allegedly made by one Femi Adeyeye that attacked the person of the Central Bank of Nigeria, CBN, Governor, Mr. Godwin Emefiele on his purpoted presidential ambition

The party in a statement in Abuja regretted that CBN Governor is being attacked on the grounds that some groups felt his candidature can make the difference and decided to purchase the Expression of Interest and Nomination Forms of the All Progressives Congress (APC) for him.

According to the statement signed by AAC’s National Publicity Secretary, Mr. Linus Cletus said “the mposter, who we have established works with Omoyele Sowore, an expelled member of the party under which authority he so wrote the statement that writhes with hate, claimed that he was writing in the capacity of National Publicity Secretary of the African Action Congress, AAC.”

“The African Action Congress, AAC, restates that the said Femi Adeyeye is unknown to the party and the party has not authorized him or any person to make such statement on its behalf.

“The party reiterates that in high tempo political season as this, it is not uncommon to find political jobbers and hatchet men who not only are seeking relevance for themselves for selfish reasons but who have set out manifest schemes to extort money from notable Nigerians through blackmail to overreach themselves.

“The African Action Congress, AAC, has also established that this writer worked with a group of renegades that described themselves as RevolutionNow and led by Mr. Omowole Sowore who the African Action Congress, AAC, expelled on August 9, 2019 for sundry malfeasance that included misappropriation of partys’ fund, disrespect to the party leadership, anti-party activities, among others.

“Let it be known that our party is not interested in primaries or any other issue concerning the APC as they remain the party’s internal matters. If Sowore, who is not a member of African Action Congress, AAC, has personal axe to grind with the CBN Governor, he should do so without dragging our party’s name into his personal battle.

“For us as a party, we have more than enough on our plates as much as the current political dispensation is concerned than dabbling into internal affairs of the APC or any other political party for that matter.

“The African Action Congress, AAC therefore notifies the general public with this statement that the purported statement released on its name attacking the CBN governor did not emanate from our great party”, the statement added.