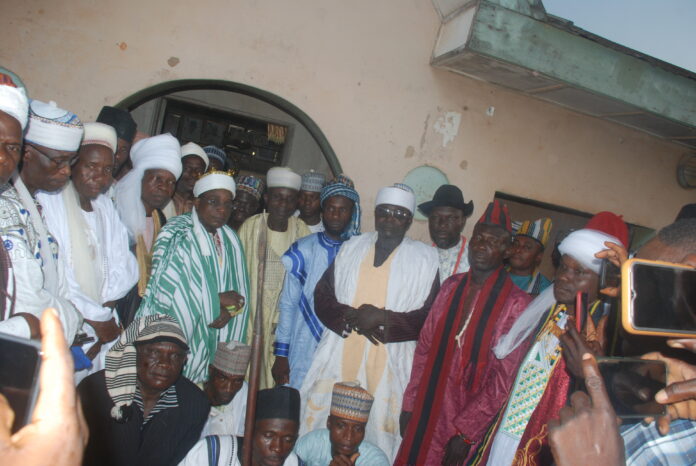 The Asugeri Idu (Idu village head), Chief Muhammad Bawa Makama in a group photograph with those he honored with titles and some of his cabinet members and others during the recently celebrated Eid el Fitr.

The Asugeri of Idu (village head of Idu), the host community of Idu Industrial Area in Abuja the Federal Capital Territory (FCT), Chief Muhammad Bawa Makama has given honors to a veteran journalist with the New National Star, Abbanobi – Eku Onyeka and other residents in the community.

The honors which varies from awards, chieftaincy titles and community leadership were given to the recipients on the second day of the just concluded year 2022 Eid el Fitri celebration at the village square of the ancient community..

While Mallam Musa Ofege, Musa Alih and Safiyanu Sallah were each coronated as community leaders of Ebira, Igalla and Kemberi Communities respectively. Others who were also made leaders of their communities each were Sunday Etua, Delta Communities and Peter Elina, Idoma and Utonkom Communities.

Explaining why the community has decided to give the titles to the recipients, the village head had this to say: We the Indigenes of Idu Community are known for rich cultures, tradition and customs and that is what we are showing today.. Any community that doesn’t have culture, tradition and customs is yet to be called a community. So today we are rekindling our cultures left for us by our fathers.

“It is in our tradition to ensure cordial relationship between, we the Indigenes and residents. So today, we are coronating some of the residents as community leaders not their various communities. This will promote peaceful cohabitation between the Indigenes and residents, as well as between the different communities in my community, Idu. We are also giving chieftaincy titles and awards to some people who have been contributing ino me way or the other to the development not the community.”

The Asugeri Idu said the reason why he gave awards to the manager, Coca Cola Company in Idu Industrial Area was because the company previously among other things built a block of six classrooms in the community’s LEA Primary School. He also informed that C – Way has been contributing in the areas of constructing farm roads for his people, even as be added that during feasts, they usually give them gifts from their products. So in order to appreciate their efforts, the village decided to honor them.

The village head said the reason why they gave chieftaincy title of Wakilin Jarida Idu to Abbanobi – Eku Onyeka was because he has been giving positive publicity to the community. “That Idu’s name is in: all the state of the federation; America, Britain Germany, China, among others is his handwork. So while we thank him, we decided to give him the title,” he said.

Speaking on behalf of the honorees, the newly installed leader of Ebira Community, Malam Musa Ofege hailed the Indigenes for the gesture. He however assured them of their continued peaceful cohabitation, even as be advised his colleagues to ensure that they promote good relationship between the communities and also between them and the host community.