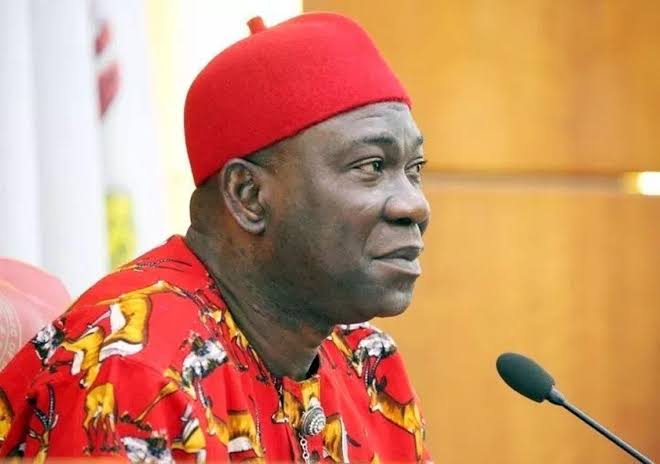 Civil rights advocacy group, Human Rights Writers Association of Nigeria, on Sunday, urged a former Deputy Senate President, Ike Ekweremadu, to back out of the 2023 governorship race in Enugu State.

According to the group, Ekweremadu should quit the Enugu governorship race to allow a younger and fine-breed politician takeover from Governor Ifeanyi Ugwuanyi whilst the ex-lawmaker pursue higher ambition.

It added that Ekweremadu, who hails from Enugu West zone, and had recently declared his intention to run for the governorship election in 2023, would be destabilising the political stability and peace of Enugu because it is not the turn of his zone to govern Enugu.

HURIWA, in a statement by its National Coordinator, Comrade Emmanuel Onwubiko, reiterated that it is the turn of Enugu East Senatorial Zone to produce the next governor of the state and that zoning has been part of Enugu politics since the return to democracy in 1999.

The group noted that zoning is constitutional being a reflection of the principle of federal character, and those of justice, fairness and equity.

Reacting, HURIWA’s Onwubiko said, “Former Senate President Ike Ekweremadu should not allow his personal ambition push him into saying things that are not factually accurate because there is nothing like political persecution in Enugu. The ex-lawmaker should not, whether directly or by proxy, claim persecution because he is running a lost contest already and should not raise false alarm to curry public pity.

“The fact of the matter is there in public sphere: it is the turn of Enugu East Senatorial Zone to produce the next governor of the state and anything outside that as Ekweremadu is doing is inciting political violence because the people are not foolish.

“Senator Chimaroke Nnamani from Enugu East zone was the governor of the state from 1999 to 2007, followed by Sullivan Chime from Enugu West zone from 2007 to 2015, while the incumbent governor Ifeanyi Ugwuanyi from 2015 to 2023 is from Enugu Nort. Automatically, it is the turn of Enugu East to produce the next governor in 2022 and not Enugu West which Ekweremadu belongs to. Anything other than that will lead to political chaos and deep-seated resentment.

“To put on record, contrary to claims by Ekweremadu, Enugu is currently witnessing good governance and Governor Ugwuanyi has even been applauded by the Army and many people as the most peaceful governor.

“Ekweremadu ought to check his unbridled ambition to be governor against the agreed zoning formula in Enugu State.

HURIWA, therefore, urged Ekweremadu to step down and look forward to international and global position after serving many years as deputy Senate President which made him the number fifth citizen in Nigeria for years. How is he going back to struggle for state position when he should be progressive-minded and let younger breed of politicians with fresh ideas to continue from where Ugwuanyi will stop?

“Ekweremadu must also check his unbridled ambition and desist from using his Abuja political forces to undermine good governance in Enugu State.”