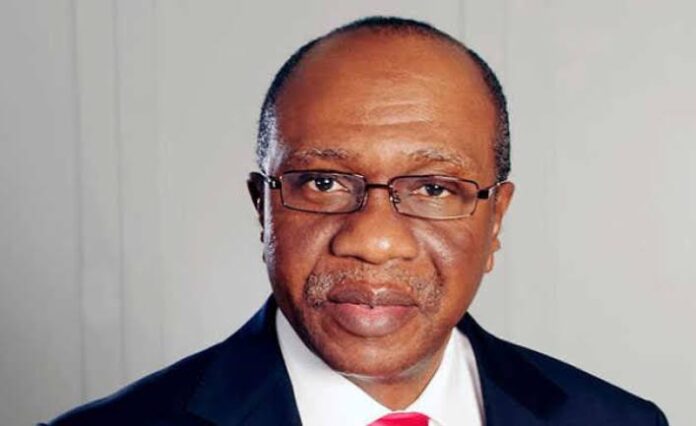 *More troubles for CBN Gov as
pressure mounts on Buhari to sack him
* CSOs demand his resignation on alleged corruption, abuse of office
*Some APC govs are leading the campaign against Emefiele to save the economy
* CO-JAFA says his continued retention affects the apex bank’s integrity

There are fresh troubles for the embattled Governor of the Central Bank of Nigeria (CBN), Mr. Godwin Ifeanyi Emefiele, over his reported 2023 presidential ambition.
President Muhammadu Buhari is said to have been under intense pressure from within the ruling All Progressive Congress (APC), opposition parties and stakeholders in the financial sector to sack the governor of the apex bank for alleged abuse of office and breaking the law governing the CBN’s leadership against partisan politics.

Some presidential aspirants in APC and some governors are leading the  campaign against Emefiele, majorly to save the poorly managed economy from sliding further and to re-assure foreign donors and financial partners
Our findings further revealed that there is a cabal within The Presidency that is fronting the candidature of the CBN Governor, who believe that his office performed well in the promotion and financing of the Anchor Borrowers programme that gulped billions of Naira that the beneficiaries are yet to repay the loans.

An approximated half a trillion Naira is still outstanding as loans yet to be repaid by farmers who were given loans by the Apex bank under the watch of Emefiele.

The anti-Emefiele forces, our findings further revealed, are insisting that he must humbly resign, be fired by Buhari or he should get ready to be forced out of office in shame through exposure of all his alleged sins in the apex bank that threw the economy under the Buhari administration into the mess it found itself.

These anti-Emefiele forces were equally miffed by the incessant devaluation of the Naira under the watch of the CBN Governor, noting that the national currency ‘is now worthless with no signs of recovery’.

This is even as a coalition of the Civil Society Organizations (CSOs) under the aegis of Coalition for Justice and Accountability For All (CO-JAFA) which is coordinated by Justice and Accountability For All (JAFA) has demanded the immediate sack of Emefiele as CBN governor by President Buhari, adding that he should be investigated thoroughly by the Economic and Financial Crimes Commission (EFCC).

These were responses to the shocking news that trended wildly on the social media and online media revealing dozens of brand new cars branded with campaign posters of the CBN governor in an open field at an undisclosed location.

The pictures have sparked anger from many Nigerians who have asked for the sack or resignation of the CBN governor for alleged official malfeasance.

In a conversation with newsmen yesterday in Abuja, Mr. John Ifeanyi and Barrister Camela Jude, National Coordinator and Secretary, said that “The allegations reported in the media against the Governor of the CBN, Godwin Emefiele, are weighty and cannot be ignored.

“For the Government that claims to be fighting corruption, this is very shocking. It is against the CBN Act 2007, especially Section 9 which states that, ‘the Governor and the Deputy Governors shall devote the whole of their time to the service of the bank and while holding office, shall not engage in any full or part-time employment or vocation, whether remunerated or not…’

“Besides, it is not good for the public image and integrity of the CBN that it’s governor has been linked with alleged crippling of our economy through fraudulent currency and fiscal policy manipulations.

“The Social Media response by Mr. Godwin Emefiele explaining that his friends procured the presidential forms of the ruling APC is very casual and untenable. Let him face full investigation because his continued stay in the office is not healthy for our apex financial institution”, JAFA stated.

Reacting to this development, the leading opposition party, the PDP, during a press conference in Abuja last week Friday demanded for the arrest and prosecution of Emefiele for “alleged abuse of office and financial impropriety”.

In a press statement signed by Hon. Debo Ologunagba, the National Publicity Secretary of the party, the leading opposition said that it was not surprised at the messy “revelation” about Emefiele.

According to the party, “on March 25, 2022, our Party alerted the nation when we got intelligence that the Governor of the Central Bank of Nigeria (CBN), Mr. Godwin Emefiele was being promoted by the Presidency as Presidential candidate of the All Progressives Congress (APC) in the 2023 general elections.

“At that time, we drew the attention of Nigerians to the provisions of the CBN Act 2007, Section 9. This provision is clear in demanding that 100 percent of the time and expertise of the CBN Governor and Deputy Governors shall be dedicated to the service of the CBN. This is because the CBN is critical to the integrity and stability of our economy.

“Furthermore, Section 030422 of the Public Service Rule states that no public officer shall (a) “hold any office, paid or unpaid, permanent or temporary, in any political organization”, (b) offer himself/herself or nominate anyone else as a candidate for any elective public office…”, (c) “indicate publicly his support of or opposition to any party, candidate or policy and (d) “engage in canvassing in support of political candidates” unless such officer resigns his appointment.

“Emefiele’s involvement in politics without resigning as CBN Governor therefore amounts to gross misconduct in contravention of Section 11 2 (2)(c) of the CBN Act.

“Now that Mr. Emefiele has joined politics and reportedly obtained the N100 million Presidential aspirant form from the APC, he cannot continue to resume at the CBN which is the commonwealth of our nation.

“Mr. Emefiele’s involvement in partisan politics while still holding office as CBN Governor underpins the impunity, lawlessness and recklessness of the Muhammadu Buhari-led APC administration. It further confirms that the CBN under Emefiele has all along been the finance department of the APC.

“It is now evident that the summersault of the economy under Mr. Emefiele as CBN Governor has been influenced by a personal partisan interest for which the CBN under his watch allegedly allowed multiple leakages in our financial regulations through discriminatory exchange rate policies and nebulous subsidies to funnel billons of naira to political lackies to fund a presidential ambition.

“This also explains why under Emefiele, the CBN which is supposed to be the bankers’ bank continues to engage in fraudulent retail banking services under ill-defined economic intervention programmes to plunder the treasury.

“The tsunamic macro-economic and fiscal policies of the CBN under Emefiele brought untold hardship to the productive and service sectors of our nation’s economy with consequential negative effect on the lives of our citizens.

“It is provocative that instead of being remorseful, Mr. Emefiele is even insulting the sensibilities of Nigerians by seeking the office of the President while still holding office as CBN Governor.

“The PDP points to reports in the public space of how Emefiele’s agents through corrupt practices, including manipulation of exchange rate, allegedly amassed sum close to $1 billion dollar which is already being deployed by the purchase of hundreds of Emefiele branded campaign vehicles in the colours of the APC in furtherance of a lavish Presidential campaign.

“The direct consequences of such atrocious regime in the CBN under Emefiele is the collapse of our naira from N197 to N600 to a dollar, the crippling of our productive sector, multiple economic recession, increased poverty, inflation and unemployment rates, high costs of living and excruciating hardship to our citizens.

“It is indeed saddening that President Muhammadu Buhari, who promised zero tolerance for corruption will enable, encourage and condone such atrocious regime in the CBN where our economy is opened to fraudulent pillaging to promote a political ambition.

“Our Party stands with Nigerians in demanding the immediate arrest, investigation and prosecution of Mr. Emefiele by security and anti-graft agencies, particularly the Economic and Financial Crimes Commission (EFCC) for alleged financial malfeasance and abuse of office in the CBN under his watch”, the statement stated.