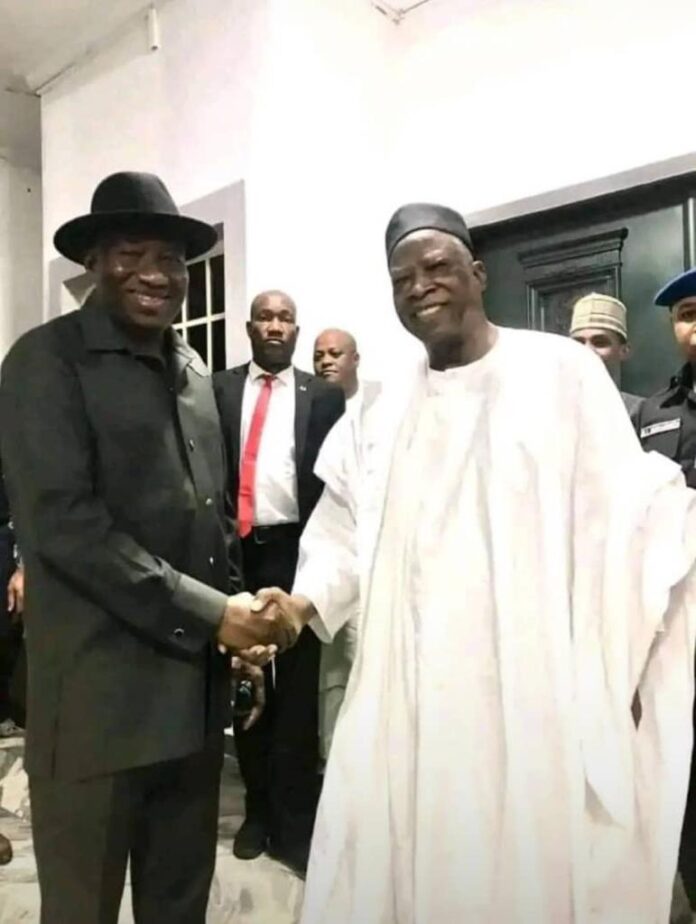 * ex-President will run and win on party platform- associate

National chairman of the All Progressives Congress (APC), Senator Abdullahi Adamu Monday night in Abuja hosted former President Goodluck Jonathan, confirming what had been rumours that the former president has defected to the ruling APC

Monday’s meeting came barely three hours after a group of Fulani cattle breeders paid N100 million to buy an APC presidential nomination form for the former president. It was also the first meeting between Jonathan and the leader of any political party since Jonathan left office in 2015.

Speaking shortly before buying the form at the International Conference Centre, Abuja, leader of the Fulani group, Ibrahim Abdullahi, said Jonathan was the first president since Nigeria’s independence to be magnanimous to them.

He said: “Remember the almajari community, he brought a comprehensive policy of reformation and intergretion of the almajari into the mainstream educational system in Nigeria. It was the dream and the vision of President Goodluck Jonathan that if that programme had continued it would one day produce from the almajiri system of education; doctors, engineers.

“Unfortunately, that programme was kept aside as soon as he left. Other parts of the community (the vulnerable community) that Goodluck Jonathan wanted to really give a sense of belonging was the Fulani community, the nomadic pastoralists.”

Sources close to the Monday night meeting told Pointblanknews.com.that both men, who were colleague-governors between 2003 and 2007, “exhaustively discussed” the former president’s aspiration to return as president in 2023.

“You know Senator Abdullahi Adamu and former President Goodluck Jonathan were governors of Nasarawa and Bayelsa respectively between 2003 and 2007. They both were in PDP. By divine arrangement, both are now in the APC,” a source close to the meeting stated, adding, “God works in mysterious ways.”

Curiously, whilst former President Jonathan and the APC national chairman were meeting, a statement emanated from the office of the Goodluck Jonathan Foundation disassociating Jonathan from the Fulani group

“It has come to our notice that a group has purportedly purchased Presidential Expression of Interest and Nomination forms of the APC in the name of former President Dr Goodluck Ebele Jonathan.
“We wish to categorically state that Dr Jonathan was not aware of this bid and did not authorize it.

“We want to state that if the former president wanted to contest an election, he would make his intentions clear to the public and will not enter through the back door,” noted the foundation.

However, sources close to what transpired at the Monday night meeting told Pointblanknews.com that the statement may have been made to in response to the barrage of questions from journalists on the matter, and the inability to reach the former president “who was meeting his party’s national chairman.”

A source noted, “Forget what the Jonathan Foundation said. If, as they would want us believe, their principal had yet to join APC, what was he doing in the private home of the APC national chairman in the dead of the night few hours after a group bought him the party’s presidential form?”

She confirmed that the former president has indeed joined the APC in his ward in Otuoke, Bayelsa State, and affirmed that her boss would “win the 2023 presidential election on the APC platform.”

She continued, “N100 million isn’t N1 million. It will be wicked and the height of insensitivity for President Goodluck Jonathan to reject the presidential nomination form from the Fulani group on the flimsy excuse that he wasn’t in the know, or that he’s not a member of the APC.

“After all, why did he lose in 2015? Was it not the same people posturing as PDP who betrayed him in 2015? Political parties are not religions. Even if they were, we have seen people who have changed their faiths, and the heavens did not fall. APC national chairman and national secretary were staunch PDP members. Nobody should hold Jonathan to double standards, please!” she noted

“So Goodluck Jonathan has dumped the opposition PDP and now member of our great party, the All Progressives Congress (APC)”, tweeted Buhari’s spokesman.

For emphasis, Ahmad added, “No one will give out N100 million to buy Presidential forms from a party he’s not a member of. The primary criterium for parties to sell their forms to you is that you must first be a registered member”.

It would be recalled that Jonathan had last month, while responding to calls by thousands of youth supporters who urged him to contest the next presidential election, failed to give a definite answer. He merely asked them to “watch out “