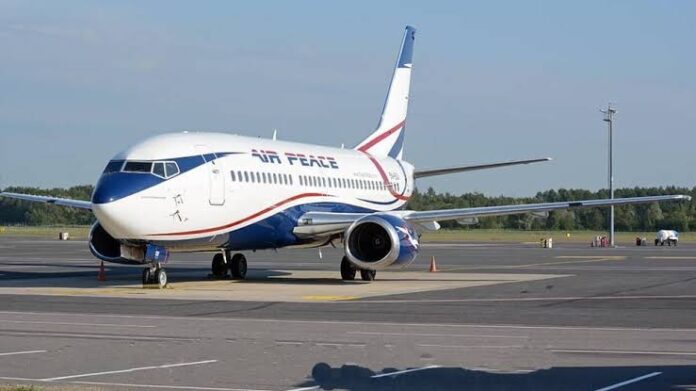 Global Peace Movement International UK, has expressed its disappointment over a viral video on the net describing the Nigerian aviation industry and Air Peace as the worst in the world.

President General of the group, Dr. Mike Uyi stated this on Wednesday in London, that the said video is the handiwork of the enemies of the country who will stop at nothing but to see Nigeria dragged in the mud.

Uyi said those behind the video are the white man’s agent who wants to make it look more credible.

“The foreigner paid to do the hatchet job failed to remember that flight and bag delay are common issues in Europe, America and Asia. It’s a global flight challenge and should not be used to dent the credibility of a reliable and professional airline like Air Peace”.

According to Uyi, flight delays and cancellations are regular occurrences in air travel. When one or the other happens, it’s important to understand your rights and what compensation you are entitled to, as a result of a delay or cancellation. If the so-called Josh Cahill claimed he had a delayed flight, did he report the issue and was not compensated?

“The U.S. and European Union have different regulations and policies regarding delays and cancellations for passengers on flights to/from/within their respective countries, so this is not about Air Peace or Nigeria”.

Uyi stressed that Unlike the EU, the U.S. does not have an umbrella regulation protecting passengers with flight issues, instead of focusing on a global issue, they choose Air Peace, because of its rapid growth and expansion in the aviation industry.

“While you don’t have as much protection in the U.S. as with the EU, the U.S. department of transportation provides compensation in some instances including: Delayed and canceled flights, overlooking, baggage damage, delays, loss, etc”.

“If Josh Cahill finds himself with a delayed flight due to one of these reasons, did he ask the airline if it will pay? He did not make any effort other than recording a poor video aimed at tarnishing the credibility and good name of Nigeria’s adorable airline”.

Uyi further stated that Josh Cahill went beyond the airlines as an entity by going personal on the personality of the CEO.

” What he has done has unmask himself properly as an agent paid to personally insult the Integrity of Nigeria aviation. If a man has airline delays in UK does he now go to talk about British Government and Cabinet members of Parliament to score a point?. GPMI is going to court to address this issue of constant blackmail by paid agents against Air Peace.